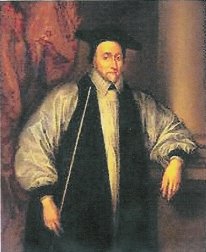 William Juxon was an English churchman, Bishop of London from 1633 to 1649 and Archbishop of Canterbury from 1660 until his death. He rebuilt the Great Hall at Lambeth Palace (now the Library).

He was probably born in Chichester, the son of Robert Juxon, and educated at Merchant Taylors’ School, London and St John’s College, Oxford, where he studied law. He took holy orders and in 1609 became vicar of St Giles, Oxford. In December 1621 he became President of St John’s College, and was Vice-Chancellor of the University of Oxford in 1626 and 1627. Juxon soon obtained other important positions, including that of chaplain-in-ordinary to King Charles I and Dean of Worcester. In October 1633 he was consecrated Bishop of London. In March 1636 Charles I entrusted Juxon with important secular duties by making him Lord High Treasurer of England; for the next five years he had to deal with many financial and other difficulties. He directed the restoration of St. Paul’s and enforced conformity without giving offence and was a lord of the admiralty 1636-8. He resigned as Treasurer in May 1641.

During the Civil War, the bishop, against whom no charges were brought in parliament, lived undisturbed at Fulham Palace, and his advice was often sought by the king, who had a very high opinion of him, and who selected him to be with him on the scaffold and to offer him the last rites before his execution. Juxon was deprived of his bishopric in 1649 and retired to Little Compton in Gloucestershire.

In 1660 he was recognized as the only eligible candidate and was elected the 77th Archbishop of Canterbury and in his official capacity he took part in the new king’s coronation. He aided the work of restoring St Paul’s Cathedral and rebuilt the Great Hall at Lambeth Palace that later became the Palace Library. But his health soon began to fail and he died at Lambeth. He left £7,000 to St John’s College, where he was buried. During his lifetime he had a well-deserved reputation for strict honesty, loyalty to Church and king, and great charity to the poor.

Juxon’s name lives on in the form of Juxon Street, SE11 which was formerly known as Mill Street. The windmill of the Apothecaries’ Company was located there and was used for grinding drugs until 1867 when it was demolished to make way for the London and South Western Railway and housing.