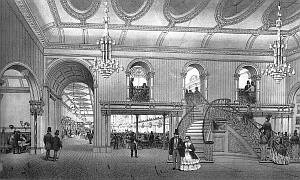 The passing of a law in 1843 allowed a modest growth in proto-music halls, probably the most important being the Cyder Cellars in Maiden Lane and Evan’s (late Joy’s) in Covent Garden. Venues outside congested central London were able to expand and experiment. Charles Morton, a young and ambitious man of 30, took over the Canterbury Arms in Westminster Bridge Road, Lambeth, at the end of 1849. It already possessed a room where semi-professional singers performed, which Morton refurbished. After being granted a music licence, Morton quickly built a new concert room that opened in May 1852. It was a fairly ordinary place, measuring some 60ft by 24ft, but Morton had great flair in bringing together first-class singers and comedians.

After two years, Morton built a second hall on land used as a skittles alley adjoining the pub, encompassing the earlier hall which continued until the new venue was completed on 15th January 1855. A few years later – in 1858 – an ante-room was added, plus a supper room, a grand staircase and an art gallery. Such innovations aroused envy in his rivals, many of whom were quick to copy them, and, although not strictly correct, Morton is regarded as the “Father of the Halls”. He established Music Hall on an equal footing with the legitimate theatre, but had the advantage of liquor sales within the building. Designed by Samuel Field, the new Canterbury was a handsome hall capable of holding more than 1,500 people. The auditorium measured 93ft long by 45ft wide, with a balcony extending around three sides of the room. The turns played from 7pm to midnight. The audience sat mostly at tables, eating and drinking – Morton himself often attending to their meals. The large stage was permanent home to a piano and large enough to accommodate a sizeable choir and, although the law did not permit spoken dialogue, copyright did not exist to prevent operatic presentations.

Entrance was 6d (3p) for the hall and 9d (4p) for the balcony in 1858. The main support came from the local working classes and tradesmen, but Morton preferred a worthier clientele. His ambitions were realised when, in partnership with his brother-in-law, Frederick Stanley, he opened the Oxford Music Hall in Oxford Street in 1861. Morton then lost interest in the Canterbury and sold it for £21,000.

In 1867 the Hall was leased to William Holland. He engaged leading acrobats and was himself carried on the high wire by Blondin. But the major stars were the singers, including Alfred Vance and George Leyboume. Edwin Villiers took over the Canterbury in December 1870, running both this and the South London Palace. Although he felt constrained by the old hall, he presented ambitious ballets d’action. He acquired more land, demolished the old building in 1875 and rebuilt it as the Canterbury Theatre of Varieties. The new theatre was designed by Albert Bridgman. A novel feature was the sliding roof, claimed by Villiers to be of his own devising, to extract the smell of smoking, beer and gas fumes. Immediately inside the main entrance was an aquarium and beyond that a fernery or “grotto”.

In 1902 a biograph box for the showing of moving pictures was installed. From about 1914 films became the main diet of the house. Decline was rapid, and by 1921 the presentation amounted to a couple of films and three live acts. The Canterbury was then purchased by the Hyams brothers for £16,000. It was refurbished and the quality of the films and stage shows improved. In 1942 the theatre was bombed, and the site was cleared by the mid 1950s.

Image is reproduced by the kind permission of Matthew Lloyd and the excellent and very interesting Arthur Lloyd website.