Sir Philip Noel Caron was the Dutch Ambassador to the court from 1609 to 1624. He was a close friend of King James 1. In 1618 he founded an almshouse, in what is now Wandsworth Road. It was a long, two-storied building containing seven apartments built specifically for seven “poor but honest women”.

Caron died at his South Lambeth house on 1 December 1624 and in his will of 20 June 1623 he “thought it necessary to declare that he some years before had caused to be built in his grounds adjacent to the Kingston Road (now called Wandsworth Road) an almshouse containing seven different apartments with dining room above and below, in which he had placed seven old woman of 60 years of age and upwards, to whom he gave 20s. (£1) a quarter, viz., at Christmas, Ladyday, St John the Baptist and Michaelmas, and intended to continue the same as long as he lived, but in case he died before he had secured that annual rent of £27 his mind was that his executors should do it for the subsistence and maintenance of the said seven women, and that with the best and most ready goods whatever kind he should leave at his death, the said 20s. per quarter might duly be paid to the said women, the payment whereof should belong to him who should chance inhabit the testator’s house, which he built in South Lambeth, who should also have the providing and appointing of the said poor women without fraud or guile; and it was his mind and will that as soon as might be all the goods which he should leave, viz. his house, lands, moveables, gold and silver plate and jewels should be sold and applied to the securing and settling of the before-mentioned three parts of his goods, viz for Philip de Caron, £120 per annum, for Peter de Caron, £60 per annum, and for the rent of his hospital of poor women; and if the before-mentioned goods should not suffice for all these, that the rest of his goods and moveables should be applied to complete them, namely the house which he had in the city of London.”

Sir Noel Caron was a well-loved philanthropist and held in high esteem. At his funeral the streets were lined with the poor he had helped. He was buried in St Mary’s Lambeth with the Archbishop of Canterbury officiating. In 1819 it was noted that the payments under the will had long since ceased but had been replaced by an annual allowance of half a guinea (about 53p) for coal paid from the churchwarden’s accounts. At this time it is also recorded that a couple of other charitable funds (Countess Gower’s and Hayes Fortee) had become involved with the work of Sir Noel’s Almshouses. 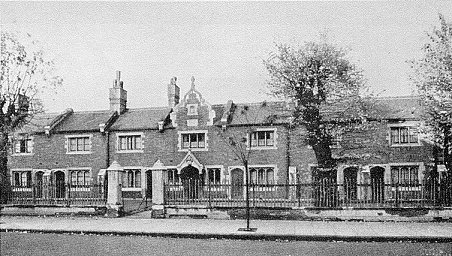 By 1853 the Wandsworth Road building had become unsuitable for elderly people, so it was sold and the current building in Fentiman Road replaced it. By the 1990s the cost of repairs and general upkeep was too much for the combined charities and following lengthy negotiations the Trustees granted a 50-year lease on the almshouses to the Family Housing Association. The homes were fully repaired and modernised and in the spirit of Sir Noel let to local women in need. They were officially reopened by the Dutch Ambassador in February 1997.

This article was researched by Catherine Holland and is based on personal knowledge and a booklet on the Lambeth Endowed Charities.