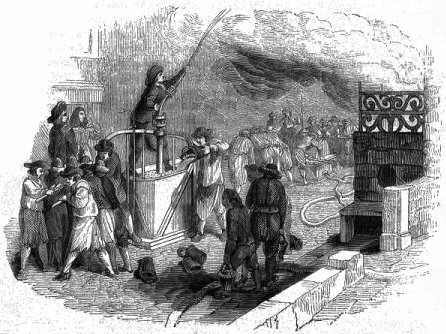 Extract from Recollections of My Boyhood by George Bower

Opposite Fentiman Road on the corner of Miles Street stands St. Anne’s Church. This took fire one wintry Sunday afternoon about the year 1854 [actually 1856]. All the resources of the fire brigade, the parish squirter and local firms were mastered together but to no avail. The fire raged on until at last the belfry fell with a loud crash scattering sparks in all directions giving an imposing effect against the leaden sky, the roof following quickly sending up a huge flame of fire lighting the neighbourhood for some distance, but like a defeated warrior with his last dying thrust, so the flames expired having done their worst. The River Effra and the Lake of Lawn contributed their utmost towards the extinction of the fire. The scene on the spot the following morning was worth a visit having been freezing hard for some days the icicles hung in very pretty and grotesque shapes from the remaining walls, etc.

The following extract from the official records of the London Fire Brigade describes a fatal fire on Albert Embankment in 1918 as a direct result of which 7 firemen died.

Loss of Life at a Fire

On my arrival I found the upper floors of a building of three floors about 45 x 30 ft. (used as cattle food manufacturers) well alight, and part of roof and upper floor had fallen in. The fire was practically extinguished by the use of two hydrants and 1 Motor Pump and the stop sent back accordingly.

At 5-34 a.m., owing to a considerable amount of turning over to be done, a message was dispatched to the effect that appliances would be detained for a time and a few minutes later another message asking for a Sub-officer and four men to be sent on with a view to the appliances and myself returning home.

At about 5-45 a.m. I was on the ground floor and in consequence of hearing a cracking noise, cleared everyone out of the building. Owing to the ground mist and smoke, the front of the building was hardly discernible, a hydrant was still being used up the Escape, I went to the front of the building with the men with a view of making up and removing the Escape, when suddenly I heard Sub-officer Cornford call out “Look out Sir” and saw the building collapsing. I called out “drop everything and run”, but was knocked down by the falling debris and part of the Escape, being subsequently extricated by our men from amongst the debris. On making enquiry, I found that a message to the effect that the building had collapsed and that several of our men were buried and ambulances were requires had been sent back. I gave instructions for the debris to be searched for the bodies of our men, then saw the Divisional Officer South who, on hearing of the nature of my injuries ordered me home. I have since been examined by the District MEdical Officer, and placed on the sick list, nature of illness “Injury to Legs”.

I regret to have to report the undermentioned casualties:-

With grateful thanks to London Fire Brigade Museum and Henriette Bertheux, Assistant Curator.