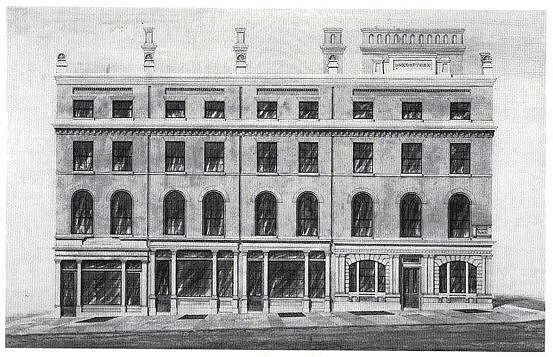 80-86 Waterloo Road: Cottingham’s house and museum were on the left; the York Hotel on the right

Lewis Nockalls Cottingham was an architect who pioneered the study of Medieval Gothic architecture. He was a sensitive restorer and conservator of existing buildings and he was keen to share his knowledge and enthusiasm with others. To this end he set up a Museum of Medieval Art in Waterloo Road where he assembled a collection of artefacts from demolished buildings as well as plaster casts of the best examples of medieval sculpture. One exhibit was a complete Elizabethan ceiling from Bonner’s House in Lower Marsh that had been demolished in 1823.

The museum was in his own house, part of a large development he designed in 1826 for John Field, the proprietor of the local wax and soap manufactory. The development was in the area bounded by Waterloo Road, York Road, Vine Street and almost down to Lower Marsh. It comprised a variety of terraces of all classes from modest two-storey cottages to a grand four-storey parade fronting Waterloo Road. Those buildings that weren’t demolished to make way for Waterloo Station were swept away when the Festival of Britain was constructed. One isolated cottage survives next to the railway viaduct, albeit surrounded by hoardings, and one grand terraced house survives on the corner of Exton Street.

After Cottingham’s death there were attempts to persuade the government to take over the museum or use it as the basis for a bigger collection. With the failure of these schemes, everything was auctioned off with a very few items eventually ending up at the Victoria and Albert Museum.