The London Fire Brigade Headquarters on the Albert Embankment were opened on the 21 July 1937 by King George VI. The building, designed by the LCC architects, E.P.Wheeler FRIBA and assistant architect, G.Weald FRIBA, was built to replace the old headquarters building in Southwark.

The large site is in two sections on either side of Lambeth High Street. The eight storey building on the Albert Embankment is built using Portland stone and light coloured brick. On the ground floor are both the Lambeth and the Lambeth River Fire Stations together with a gym. For the first floor the architects designed living quarters and recreation rooms for on-duty fire crews together with a London-wide control room. The upper stories also contained the main administrative offices for the brigade and numerous flats for fire officers. Behind this building is a large drill yard complete with a 100ft drill tower with built-in hose drying facilities and a separate bandstand!

Across Lambeth High Street is the workshop block which is built around a quadrangle. Here are garages and repair shops, stores, various workshops and a training school complete with kitchens and more living quarters. The site and the buildings cost just £390,000 which included two roof gardens. 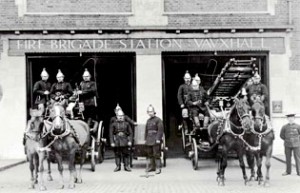 Since this piece was contributed, the Fire Brigade Headquarters have been sold for redevelopment.