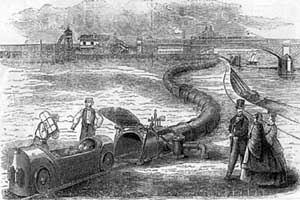 In the mid 1850s the Post Office commissioned a feasibility study to investigate the possibility of a pneumatic tube system to convey packages between two offices. The study concluded that, while possible, it would have high capital and running costs – so the Post Office dropped the idea.

However, on 30 June 1859 Thomas Webster Rammell and Latimer Clark formed the London Pneumatic Despatch Company to build an underground tube network within central London “for the more speedy and convenient circulation of despatches and parcels”. The network would link the main railway termini to post offices and marketplaces. A stationary steam engine turning a reversible fan would push or (depending on direction) suck capsules along. The Company obtained the necessary Act of Parliament to dig up roads and lay down tubes on 13 August 1859 and raised £25,000 in order to test the technology and construct a pilot route.

Early experiments were conducted at the Soho works of Boulton and Watt in Birmingham. The first full-scale trial took place in 1861 on land owned by Vauxhall Waterworks and the London Brighton and South Coast Railway at “Battersea” (Nine Elms). A single tube 30 x 33 inches and 452 yards long, with curves up to 300 foot in radius and gradients up to 1 in 22 was installed on the surface. The tube contained 24 inch gauge track upon which the capsules ran. The capsules had rubber flaps or flanges to make them airtight. Power was provided by a 30 horse-power engine with a 21 foot diameter fan. Each capsule weighed up to 3 tons, and in tests achieved speeds of up to 40 mph.

A permanent line was constructed between Euston station and the North West District Post Office in Eversholt Street (1/3 mile) and started operation on 20 February 1863. A single capsule could carry 35 bags of mail at twice the speed of mailcarts. The system was extended from Euston to Holborn where the capsules averaged 17 miles per hour. But the initial system was reported to be under-powered, and leaked air badly but this did not stop work on a further route from Holborn to Gresham Street, and a branch ‘line’ to Cheapside.

By 1869 running speeds increased to 60 mph and the route included gradients of 1 in 15 but parts of the pipeline tended to fill with water and some parcels arrived wet. Overall, the Post Office was not impressed with the system, and after some turbulent years it ended its contract and the company eventually went into liqidation in June 1875. The tubes were retained and in 1921 they were purchased by the Post Office to run telephone cables in. Examples of the capsules can be seen at the Museum of London and the National Railway Museum at York.