Oval Cricket Ground is the headquarters of the Surrey County Cricket Club (SCCC) and is on land leased from the Duchy of Cornwall that was originally a cabbage patch and market garden. The Montpelier Cricket Club of Walworth was granted a lease on the site in 1845 initially for 31 years at £120 per annum. The SCCC was formed in the same year following a meeting at the nearby Horns Tavern. The original turf cost £300 and some 10,000 turfs from Tooting Common were laid in March 1845. A pavilion was built in 1858 and replaced c.1898. The first England vs. Australia “Test” Match took place at the Oval ground in 1880.

On 29 August 1882 England lost to Australia by seven wickets in a very tense match. So tense that one spectator is said to have bitten through the handle of his umbrella! This was the first time that England had lost on home soil. A spoof obituary to English Cricket was published in “The Sporting Times” which said:

In Affectionate Remembrance of ENGLISH CRICKET, which died at the Oval on 29th AUGUST, 1882, Deeply lamented by a large circle of sorrowing friends and acquaintances R.I.P. N.B. – The body will be cremated and the ashes taken to Australia.

The idea took off. The English team left for a tour of Australia shortly afterwards. After winning two out of three tests the visiting English team captain was presented with a small brown urn containing the ashes of a cricket bail by some Melbourne women. These “ashes” are supposed to represent English cricket and since then ‘The Ashes’ is the trophy that is at stake when England plays Australia at Test match cricket. The urn is on display at in the cricket museum at the Lords Cricket Ground. Since 1998 an Ashes-shaped Waterford crystal trophy has been presented to the winning captain at the end of each Test series between Australia and England. 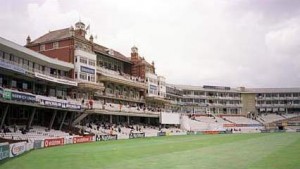 In the 1980s the Lock and Laker Stands were built together with the Bedser Stand. The ground capacity was 15,000. In 1988 the ground was renamed The Foster’s Oval following a sponsorship deal with an Australian Brewing company. After thirteen years, from 21 June 2001, the ground was ‘rebranded’ to The AMP Oval following a huge new sponsorship deal with Australian financial services company, AMP. The new sponsors plan to increase capacity to 23,500.

The grounds have been rebranded the Kia Oval.