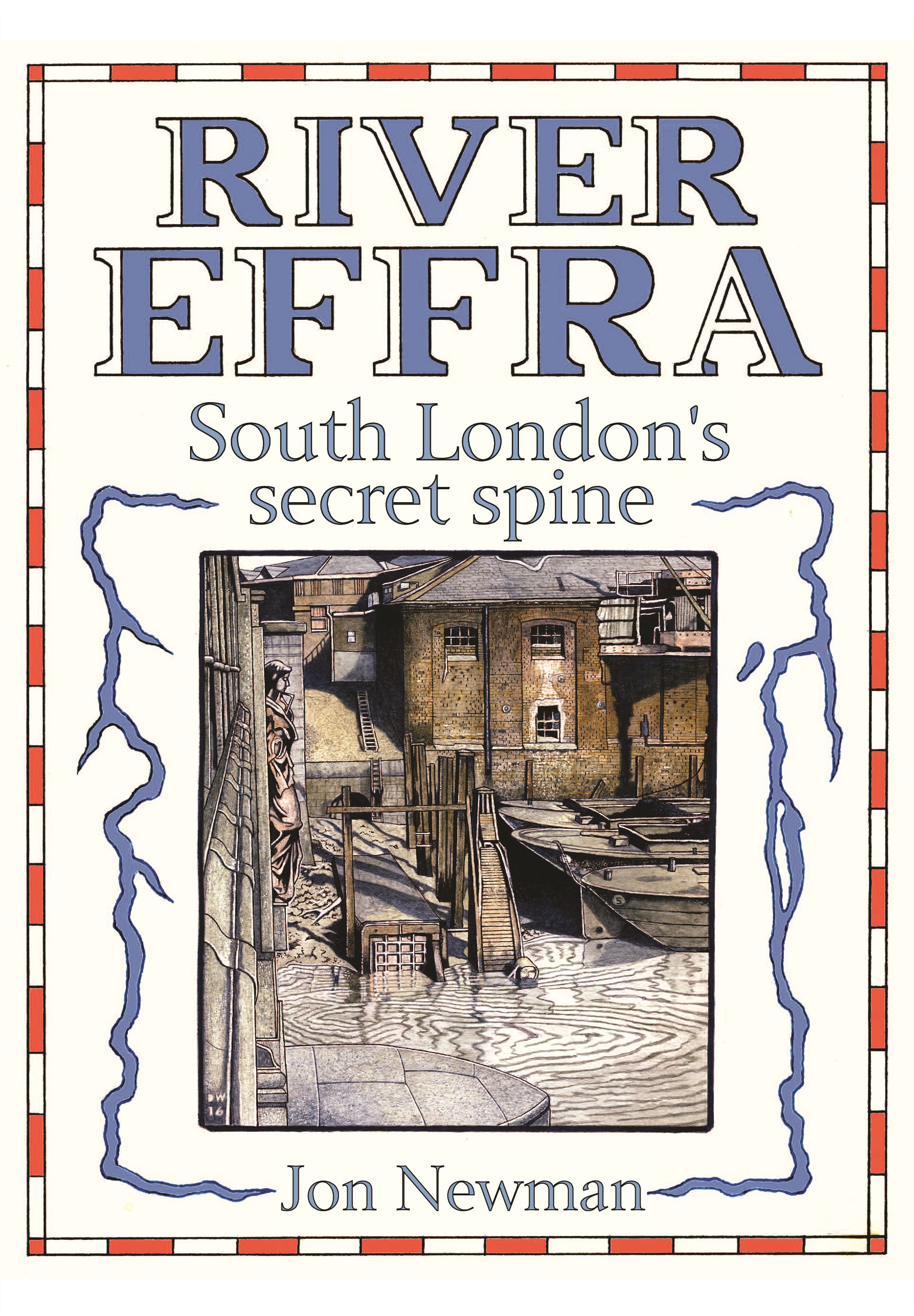 Despite its modest price (£9.99, published by Signal Books) Jon Newman’s 2016 River Effra, South London’s Secret Spine is lavishly-illustrated, deeply-researched and, above all, grippingly-readable. It’s a landmark work, the first detailed and comprehensive account of the Effra. This is a river, itself once a landmark, but for over a century and half now out of sight if not out of mind or urban myth.

‘What prompted me to write a book about the River Effra? In part it was a response to 25 years of overheard and often heated arguments in South London pubs about the river’s course: “Did it flow down Effra Road?” (In fact no). “Did it still feed into the Thames below Vauxhall Bridge?” (It never did). Then there was the trotting-out of the same hoary urban myths: “Did you know Queen Elizabeth sailed up the Effra in her barge to visit Walter Raleigh?” It was that and realising that most of the content already online that purported to tell the river’ story was really just an echo-chamber for the same old half-truths and quarter-fictions. No one had yet done a thorough job of researching and writing a history of the river, so I would have to.

‘The Effra flows the length of borough of Lambeth, rising in the hills of Upper Norwood and Crystal Palace and flowing north through West Norwood, Dulwich, Herne Hill, Brixton, Kennington and Vauxhall to enter the Thames just west of Vauxhall Bridge.

‘The residents of Vauxhall, South Lambeth Road and Kennington had been content to live along its bank at the end of the eighteenth century but by the middle of the nineteenth century they were confronted by a different beast: suburban development up-river in Brixton and Herne Hill had turned their erstwhile small sparkling stream into, effectively, a large open sewer. John Thomas, resident of South Lambeth Road and letter-writer to The Times, spoke for all his neighbours when in 1850 he complained of “Three feet of excrement always exposed to the lungs of the neighbouring population’. Were the cholera here now it would revel in this “Lethe of filth and abomination”, railed Mr Thomas.

‘So the Effra had to go, and in the mid-1860s the great Victorian engineer Joseph Bazalgette sank it into a sewer, and using the Effra’s flow to help drive the intercepting sewers carrying London’s sewage out to the Southern Outfall at Crossness[1]Visit www.crossness.org.uk for more information. The upper river still flows below ground – and occasionally floods – but north of the Southern High Level Sewer which crosses Brixton Road at Loughborough Road, the course of the Effra is effectively dry and reduced in function to an emergency storm drain.” 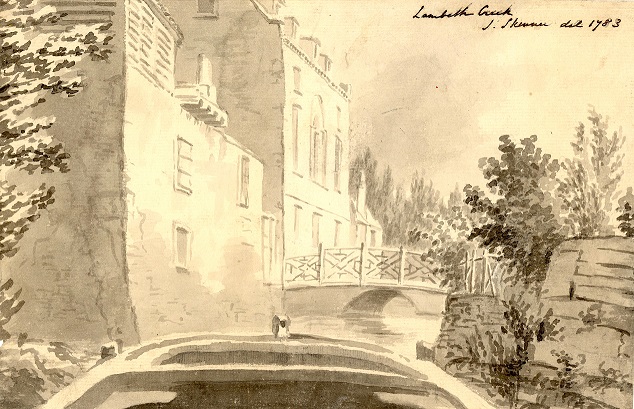 The old course of the Effra through Kennington and Vauxhall: At St Mark’s church the Effra flowed under Brixton Road at Hazard’s Bridge into Prima Road to reach Clapham Road. This section by St Mark’s church was ‘arched’ over in 1838, concealing the incongruity a polluted stream alongside a burial ground. Image: Lambeth Archives. 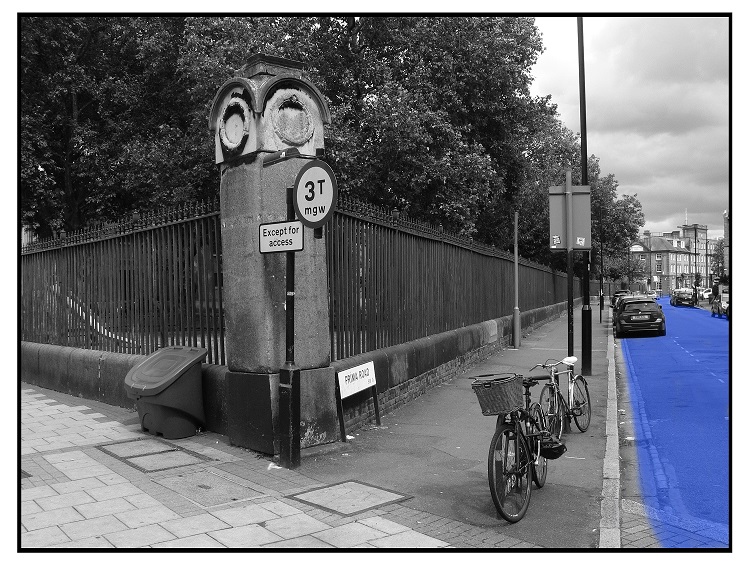 Prima Road: After flowing under Clapham Road at Merton Bridge, the Effra passed above the Northern Line between Oval tube station and Hanover Gardens, across the Triangle adventure playground, between the Roebuck pub and the rear of Archbishop Tenison’s school, through the Ashmole Estate into Bedser Close where it turned to flow west along Ebbisham Drive and Lawn Lane to reach South Lambeth Road. There it turned north, passing under the arches of the railway at Vauxhall along the line of South Lambeth Place before crossing under Vauxhall bus station and the Wandsworth Road at Cox’s Bridge, the third of its medieval river bridges. Photo: David Western. 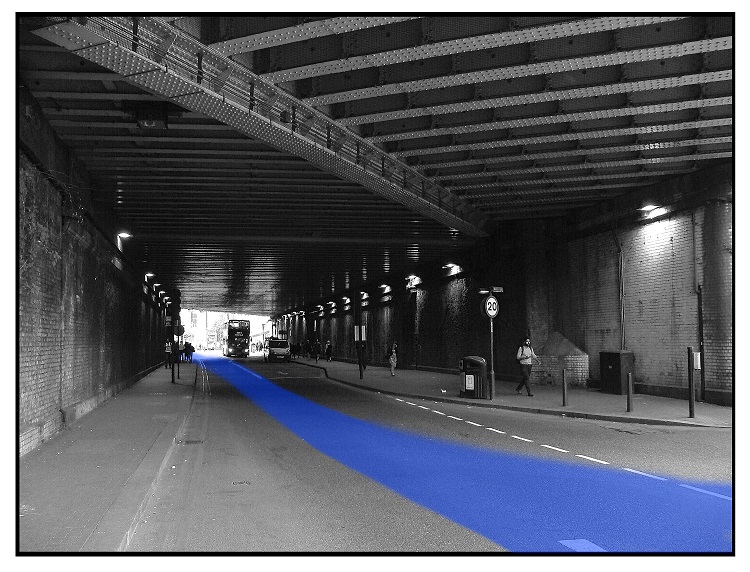 At this point it entered Vauxhall Creek. Brunswick House, the large Georgian villa on Wandsworth Road, survives as a reminder of what the area once was and the creek ran down the east side of its garden to the Thames, through a space subsequently and variously occupied by Prices candle factory, the Phoenix gas works, the Nine Elms cold store and now the St George Wharf development. Many people believe that the storm-drain outflows they can see beneath Vauxhall Bridge mark the mouth of the Effra, but this is wrong. The Effra exited into the Thames just by the present Vauxhall St George pier. Photo:David Western.