The Victorian sugar magnate Sir Henry Tate, who lived in Streatham, donated the Tate Gallery to the nation on one condition. His art collection was to be housed there, and so it was and is. What promise did Sir Henry extract in return for his donation of the Tate South Lambeth Library, which opened nine years earlier (1888) years later just across the Thames in Vauxhall. Lambeth Borough Council doesn’t seem keen to say. And three times in 25 years now councillors have tried to either demolish or otherwise dispose of this gift from Sir Henry to the people of Vauxhall. 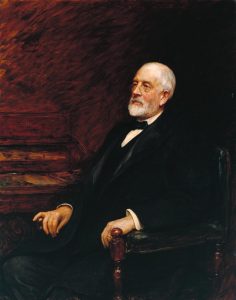 I’ve been chairwoman of The Friends of Tate South Lambeth Library since 2000 and in my time Lambeth Council has tried to close down the library twice, and once before that.

Opened in 1888, The Tate South Lambeth Library (TSL) at 180 South Lambeth Road is the borough’s oldest public library in continuous use. TSL is the first and smallest of the three libraries that the sugar magnate and philanthropist Henry Tate donated to Lambeth borough. Sir Henry’s other two bequests are the Brixton Tate (Lambeth’s central library) and the Streatham on Streatham High Street.

TSL was built at the same time as and in keeping with three nearby apartment blocks, the Victoria, Albert and Athol Mansions. Although near the strategic target of the Nine Elms railway yards, TSL survived the extensive bomb damage to the neighbourhood during the Second World War. So far, the library has also managed to survive Lambeth Borough Council’s repeated attempts to accomplish the destruction that eluded the Luftwaffe.

Lambeth Council apparently first proposed to demolish TSL when in the 1970s Athol and Albert Mansions, which abutted the library, were knocked down to make way for the Mawbey Brough council estate. Somehow, the library building survived.

Lambeth had another go at TSL in 1999, when councillors planned to replace the borough’s 12 libraries to just five “centres of excellence”. That plan fell by the wayside after widespread local objections including the opposition from 14 local residents’ associations. The fight was co-ordinated by a local group set up to protect TSL, the Friends of Tate South Lambeth Library.

The Council recognised TSL’s vital importance to the children who attend the five primary schools within walking distance. Then there’s the local people, who by now included a large and growing Portuguese immigrant community. 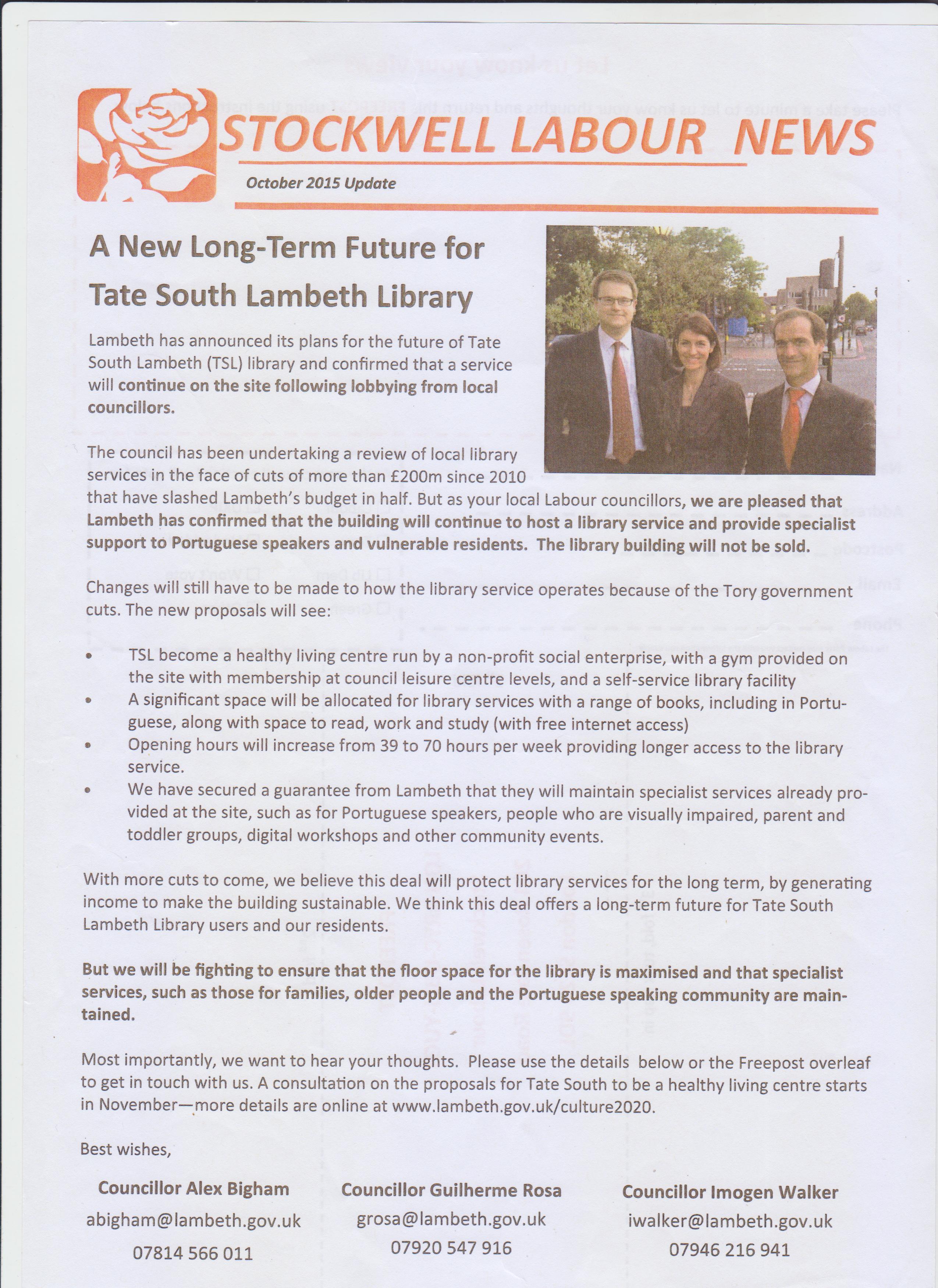 Fast forward 16 years to 2015, and the TSL was again in peril. Lambeth exhumed the ‘five-library’ model was. This time councillors argued that Lambeth could not afford its ten surviving libraries because Whitehall was cutting local government funding. Yet other local authorities seem able to absorb such cuts without slashing libraries – which, in Lambeth’s case, are already on a very modest budget.

The five-library idea was rehashed in the Culture 2020 document the Council approved in October 2015. TSL was now to be converted into a “healthy living centre” with a “book-drop facility”. Translation: a privately-owned gym with a few shelves, a book-processing machine, most likely just one or two computers, but no on-site staff.

The same fate was decreed for the Carnegie and Minet libraries, while Waterloo library was to shut down and moved to a room in a church school. This latest cull of libraries was to start in the year beginning April 2016, but yet again TSL lived to fight another day.

Fortunately for TSL, Lambeth had to submit the death sentence to public consultation. The reason? The Council’s October 2015 proposal differed fundamentally from a previous proposal nine months earlier that would have kept TSL as an interim “town centre” library for the north of the borough, pending the installation of a new library serving the area in 2020-2. Back in October 2015, however, Lambeth proposed that the Durning be given this interim “town centre” library status.

Thus the Culture 2020 proposal as it related to TSL and Durning had to go before the public. It was a very brief consultation (just four weeks). It was not widely advertised in the neighbourhood. People had either to go into TSL to pick up the questionnaire, or to find out for themselves where to fill in the form online. Also, the proposal did not set out a “no-change” option for TSL, keeping it as a staffed, full-service library.

The Friends of Tate South Lambeth Library embarked on a two-pronged campaign, one, to encourage people to respond, and two, to counter misleading impressions either in the questionnaire or elsewhere, for example in a leaflet distributed by Stockwell councillors.

They claimed to have “saved” the library and the services it offers, such as support for the visually-impaired, English classes for Portuguese speakers, and parent and toddler sessions).

The result that was that the campaign paid off in spades. The public gave Lambeth’s latest proposal a massive thumbs-down.

Here are the figures:

To those familiar with TSL and its deep links with the local community, the rejection of this latest threat to the library came as no surprise. People voted to keep something which they value and regard as their own.

Indeed, TSL – a small library systematically under-resourced by Lambeth Council – ranks among the top performers in the Lambeth public library system for growth in use, visit numbers and range of activities. It has groundbreaking resources for the visually-impaired, not available in other Lambeth libraries or indeed in most libraries throughout the country.

Moreover, TSL serves an area, Vauxhall-Nine Elms, which is scheduled for rapid population-growth. A sixth primary school is to open nearby in South Lambeth Road.

So TLS’s future is secure at last?

Local authority finances are still under pressure as central government funding is squeezed. Councillors remain wedded to their “Lambeth model” of a few large libraries (as few as statutory obligations allow) and many book drops (although these do not satisfy statutory requirements).

TSL does not fit this model, so the community remains on the alert for Lambeth’s next attempt at close us down. 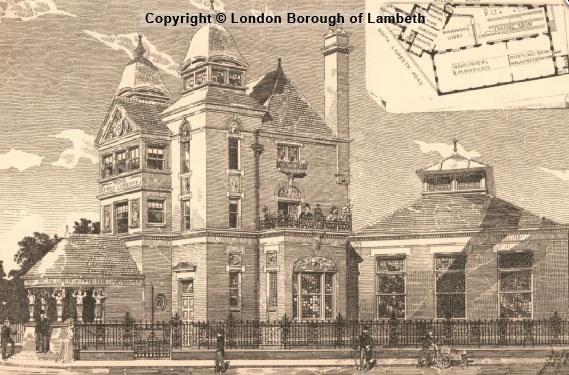 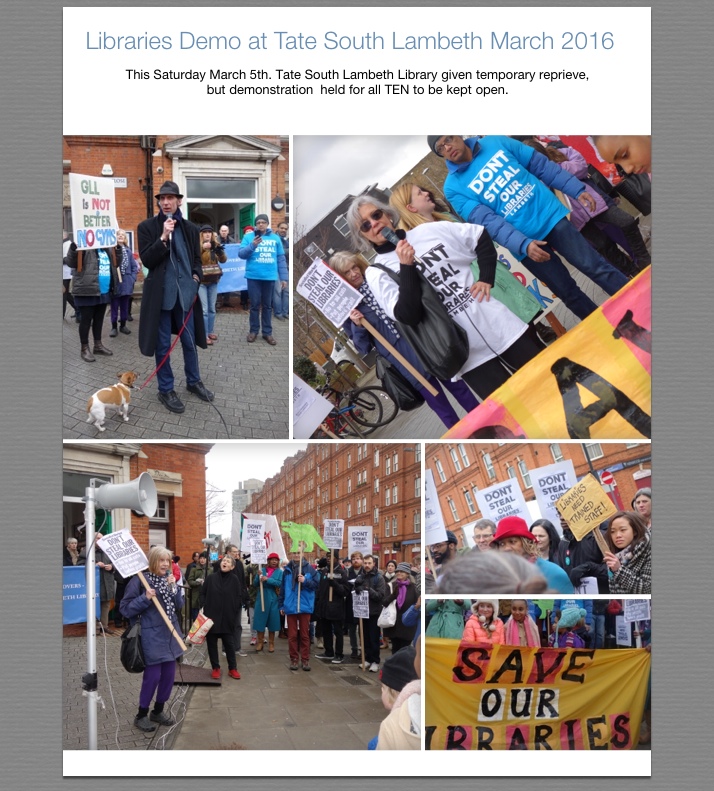 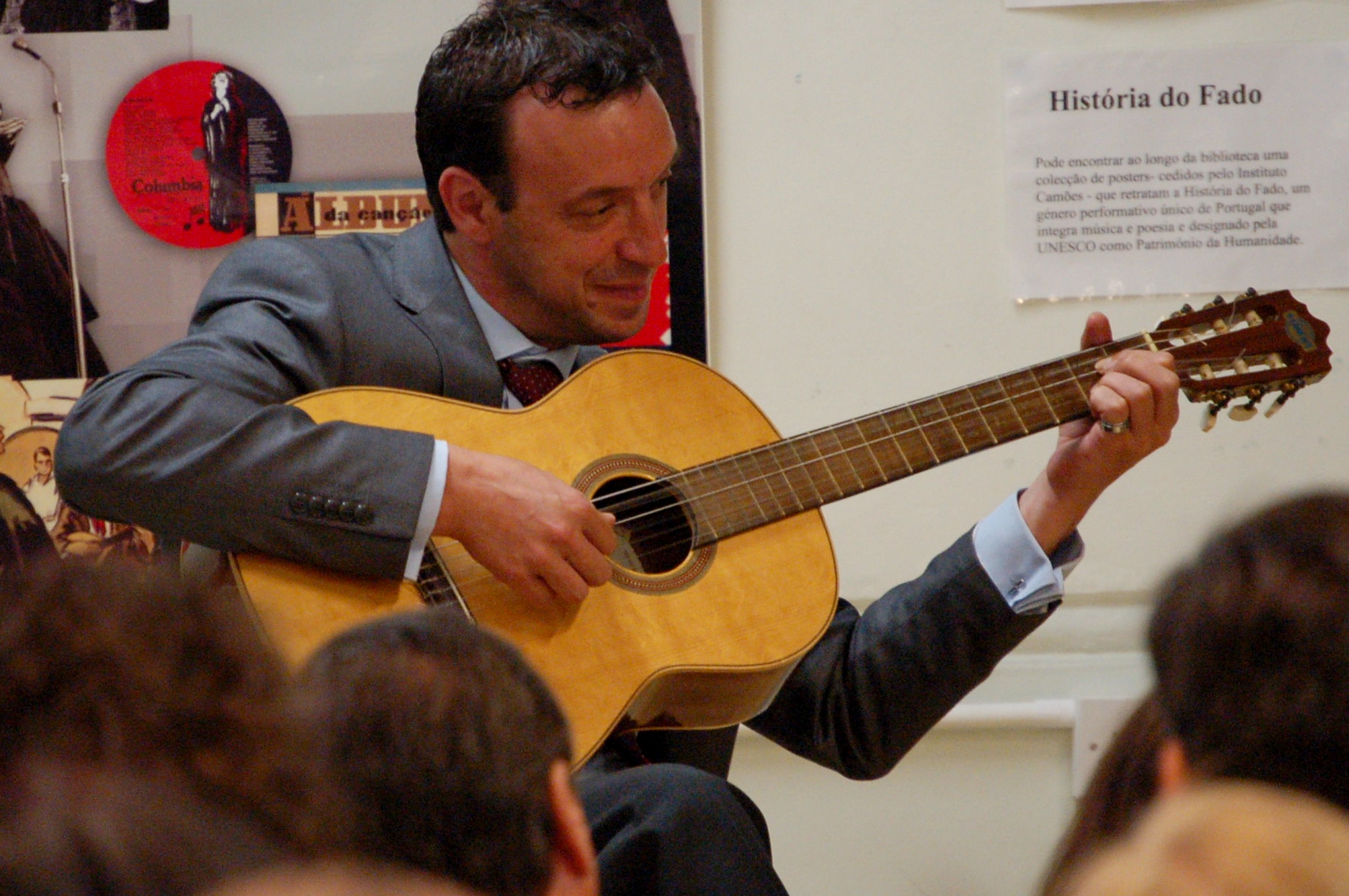 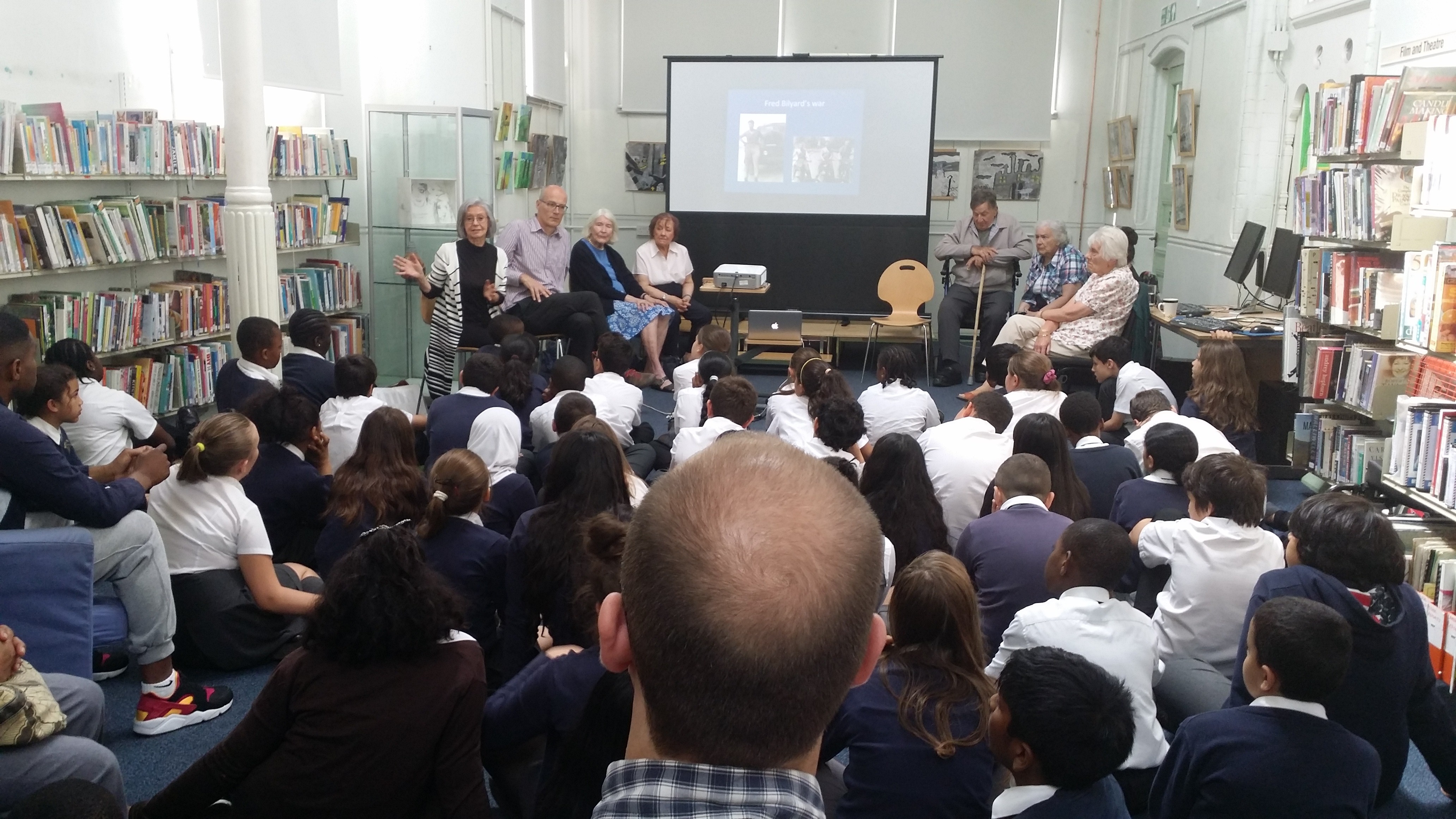 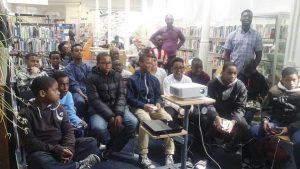 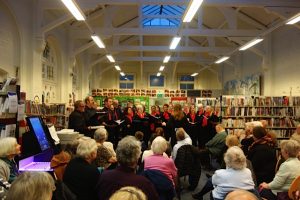 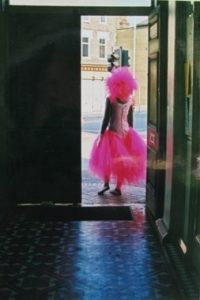 Performer at a TSL event 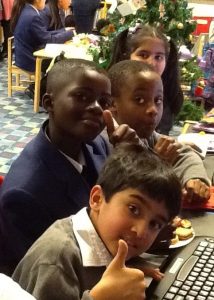 Christmas party at the library

Previous Post: « Vauxhall’s Doulton & Co – from sewer pipes to art pottery
Next Post: 6 September: You are invited to the launch of Vauxhall History PLUS a Vauxhall Gardens Walk »