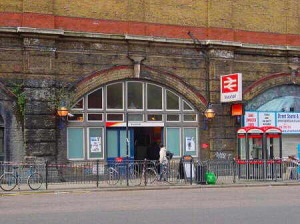 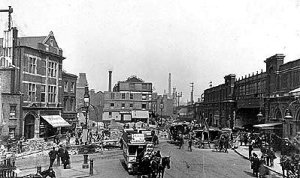 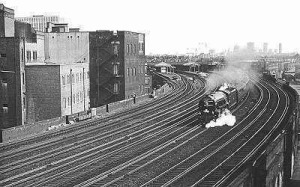 This photo was probably taken in 1966 and shows the A2 class Locomotive designed by Arthur H. Peppercorn for the LNER and manufactured in 1948. It was originally named The Blue Peter after a famous racehorse, and under Bristish Railways was numbered 60532. Weighing in at over 161 tons this 4-6-2 had 6’2″ driving wheels powered by three cylinders and a boiler pressure of 250psi. During trials in 1951 it achieved 100mph.

Many visitors to this page will recall the ingenious design painted on to the long curved vault beneath the railway platforms. It consisted of four different anamorphic* images, which needed to be viewed from four different locations, marked in the floor. The main image, was a version of the classic “bent stick” British Rail (BR) logo. The mural was created by William Pye in 1986 but destroyed around 2002.

With grateful thanks to Dr Phillip Kent and his very interesting Art of Anamorphosis website.