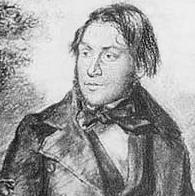 Andrew Nicholl RHA (1804-1886) was the son of a Belfast bootmaker and started out as a compositor on the Northern Whig newspaper, but from an early age was interested in art. His artistic talents were spotted by Sir James Emerson Tennent, the Colonial Secretary, who became his patron, funding a trip to London in the early 1830s that enabled Nicholl to develop his style and technique. During this trip Nicholl studied the works in the Dulwich Picture Gallery.

Nicholl’s style was greatly influenced by Turner. He often used the sgraffito technique, where the top layer of paint is scraped away to reveal a different colour underneath, to great effect particularly to highlight features such as flowers and grass. Nicholl’s early hard edge landscape style later softened to a more romantic and haunting one. His paintings of wild flowers have a slightly surreal quality and many (unusually) have landscape backgrounds. 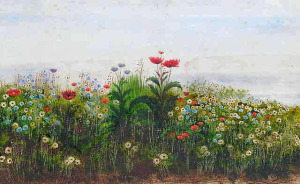 Nicholl first exhibited at the Royal Academy in 1832. In 1836, he became a founder member of the Belfast Association of Artists and exhibited his work in the Belfast Museum. A year later he became an associate of the Royal Hibernian Academy (RHA), Dublin and went on to become a full member in 1860.

Tennent helped Nicholl gain a government appointment to teach in Ceylon at the Colombo Academy. Nicholl went on to illustrate Tennent’s own account of Tennent’s career. Nicholl’s brother William was also a great supporter and he organised an exhibition of 222 of Andrew’s pictures at the Belfast Rambling and Sketching Club. Another large exhibition of his works was held in 1886 as a memorial show when 300 paintings were displayed.

Nicholl lived in Belfast, Ceylon and London and from 1862 until his death in 1886 he lived south of the River Thames including: