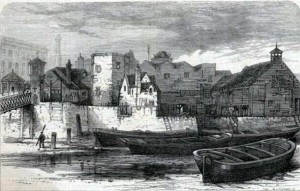 William Lithgow’s Survey of the Civil War defences of London in early May 1643 mentions a fort at ‘Nyne Elmes’. This area was a low swampy district, which was prone to flooding and had some windmills and some willow beds. Despite its swampy setting, the area soon attracted industry with docks for wood and timber companies lining the riverbanks and brewing, lime kilns, potteries lining the road.

The Southampton and London Railway Company opened its London terminus at Nine Elms in 1838. The line was extended to Waterloo in 1848, by means of 290 brick arches, and the Nine Elms station was closed but the site became a huge railway yard. Gasworks were established in 1853, close to some existing waterworks (South Lambeth Waterworks Company) which later became the site of Battersea Power Station. In 1974 the New Covent Garden Market opened, and other derelict land became part of the current industrial park.