The 20-year-old Van Gogh lasted only a year in Stockwell before leaving his digs in 87 Hackford Road (1873), it’s said, because he was getting nowhere with Eugenie Loyer, the landlady’s daughter. The painter seems to have left behind just the one ‘Van Gogh’, a sketch of the house that was not accepted as by him for another century. 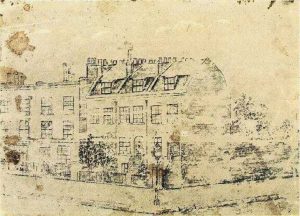 A street or two away, a major postwar figurative painter, Anthony Eyton (say ‘Eye’- ton) RA, now 93, has lived and painted in his studio there for over half a century. Eyton’s now busy with six interiors, studies of the house/studio, as well as three exteriors of something he’s already made a work of art – the deep, green garden, as irrepressible as the painter himself.

When Eyton arrived hereabouts, he was 37, and already married to his late wife Mary. The couple’s three daughters were all born here, Jane Eyton, herself a sculptor, Clare Eyton, a potter, and Sarah Eyton, a designer. Anthony Eyton’s own work, as a teacher as well as painter in illustration, landscape, portraiture, still life and street scenes, has taken him around the world and is seen in leading galleries; he’s in the Tate Collection, for example.

Locally, Eyton has sketched and painted many Brixton street scenes over the years, and was called in to paint the turbine hall at the former Bankside Power Station, then about to become Tate Modern. He’s also ‘done’ Battersea Power Station as it awaited development.

The painter’s most recent exhibition, at Mayfair’s Browse & Darby Gallery in September/October 2016 was particularly special, in that also on show were piercingly-rendered landscapes by the artist’s mother, Phyllis Eyton. Born in 1900, she lived to see her Apple Tree in Blossom exhibited at the Royal Academy of Art in 1929, but later in that same year was to die in a hunting accident. Phyllis Eyton was 29. Her son Anthony was six.

‘In 1960 Mary and I were living in the King’s Road, but in a place too small to raise a family. Mary wanted to go to Notting Hill Gate but nothing suited, everything was too expensive or there’d been a murder around the corner or something like that.

Then Euan Uglow, a friend, said ‘There’s a For Sale notice up in Brixton’. Euan came this way when he was at the Slade [School of Art], you see.

So we had a look at the house. It was being sold by the Church Commissioners and it seemed very, very cheap compared to Notting Hill Gate. It was also very convenient for teaching at Camberwell, where I was on the staff of the College of Art.

The house was dark brown inside, so there we were, with lots to do. At first, Mary really didn’t take to the house as much as I did. She was very conscious of the traffic around here, already heavy by the standards of the time, in case any children we had would be poisoned by the lead in the exhaust fumes.

But then the house did come with a really big garden, although apart from a row or two of daisies there really was nothing much there ……so [laughs] the garden has been my most successful project – making it into something mysterious and quite surprising really. People love it.

The garden’s become better and better every year because the familiar becomes quite magical really. The fact that it [the house] is 1824 (or is it 1823?) and that the River Effra, in a pipe now, runs nearby, that’s always been a kind of romantic thing – how wonderful it must have been once when you crossed little bridges across the stream to the houses opposite.

All that appeals, and of course today there’s throbbing Brixton itself. So it’s a marvellous neighbourhood in which to spend 56 years in one place. All three of our daughters are one way or another are still very much connected with this house.

This is a neighbourhood steeped in history, music hall history, Italian immigrants, for example. There’s a sort of air about South London which is much freer, and just that much pleasanter than the crowded North London, so…. this side of the river, please! Show your passport, as you might say!

I think the lure for me has always been Brixton itself – the market, for example. I spent two or three years doing nothing but going to the Granville Arcade – they call it ‘Brixton Village’ now – so I could draw in pastel on the spot there.

When we first came to the Brixton Road I was doing regular exhibitions at the New Art Centre, a very respectable sort of gallery in Sloane Street. I had pictures in The Royal Academy shows, was elected an Associate in 1976, and as an Academician ten years later.

I’d paint either on the spot or from drawings.  One I painted on the spot at Brixton Market was for London Transport.

People and so-called landscapes go hand in hand, and it involved me going about locally. What excited me was people, people going about their business. I’d love to paint a particularly pretty girl that works in Lidl, but you can’t really do sketches – let alone a painting – in Lidl, can you?

As for here [the house], I’ve painted models, still life and garden pictures.

Influences? Oh, [Frank] Auerbach, [Leon] Kossoff and [William] Coldstream, and of course, Cezanne and all the Old Masters, Giotto, Piero della Francesca, Titian…Rembrandt – nothing but the best!!!

The nine pictures I’m working on? I’m exploring the house, so two staircases, four of the studio, and three of the garden.

All three of the garden paintings are of the big walnut tree which came down in the hurricane of 1987 and created a sort of arch. It’s a race now between how long it’s safe to be near the trunk, and the beetles having eaten away so much of it that the trunk collapses altogether.

I grew up in Silchester near a stream called the Foudry Brook in Hampshire. The brook’s meanderings fascinated me, mean so much to me even now. I played in it, dammed it. Father fished and Mother painted. Father taught me to fish, trout mostly.

Father [Captain John Eyton], had been an Indian Civil Service official and survived the Great War to write Indian romances such as Jungle-Born and The Dancing Fakir, much in the Rudyard Kipling vein, and he was compared to Kipling.

One influence on Mother might have been Arnesby Brown [the landscape painter Sir John Alfred Arnesby Brown RA].I can’t say how much Mother knew about the Impressionists, but Cezanne and Monet must have been floating about out in the atmosphere.

Mother was taught by a governess who was a painter herself and Mother would have learned about colour from her.

I think Mother’s quality was a directness, an ‘I’m in this spot and I’ll give you the very light as it strikes me’. I was only just thinking about it yesterday, the things that touched her, dappled light… marvellous skies.

She seems to make you almost be in that place. She makes you feel as if you are on that very spot, and that’s very rare in painting. My God, but she can bring me out in goosebumps!

Mother’s work is illustration but in very painterly terms. Every day I look at her paintings and I see more and more .’

Anthony Eyton DVD is available from Browse and Darby. 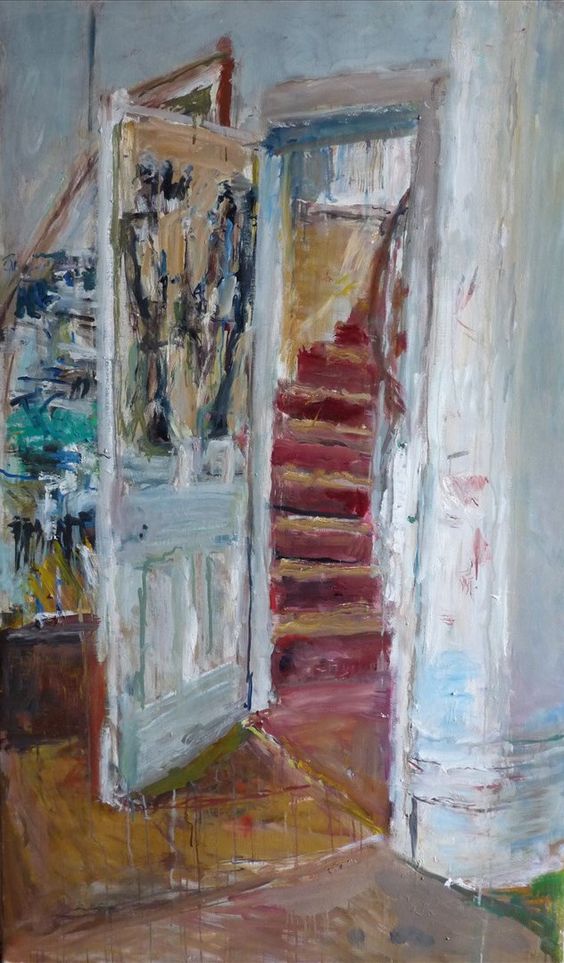 Staircase in the Morning 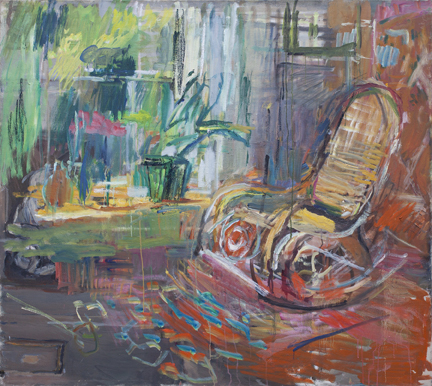 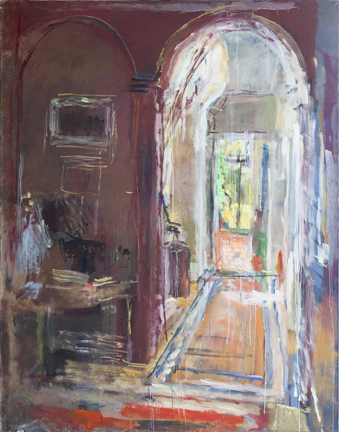 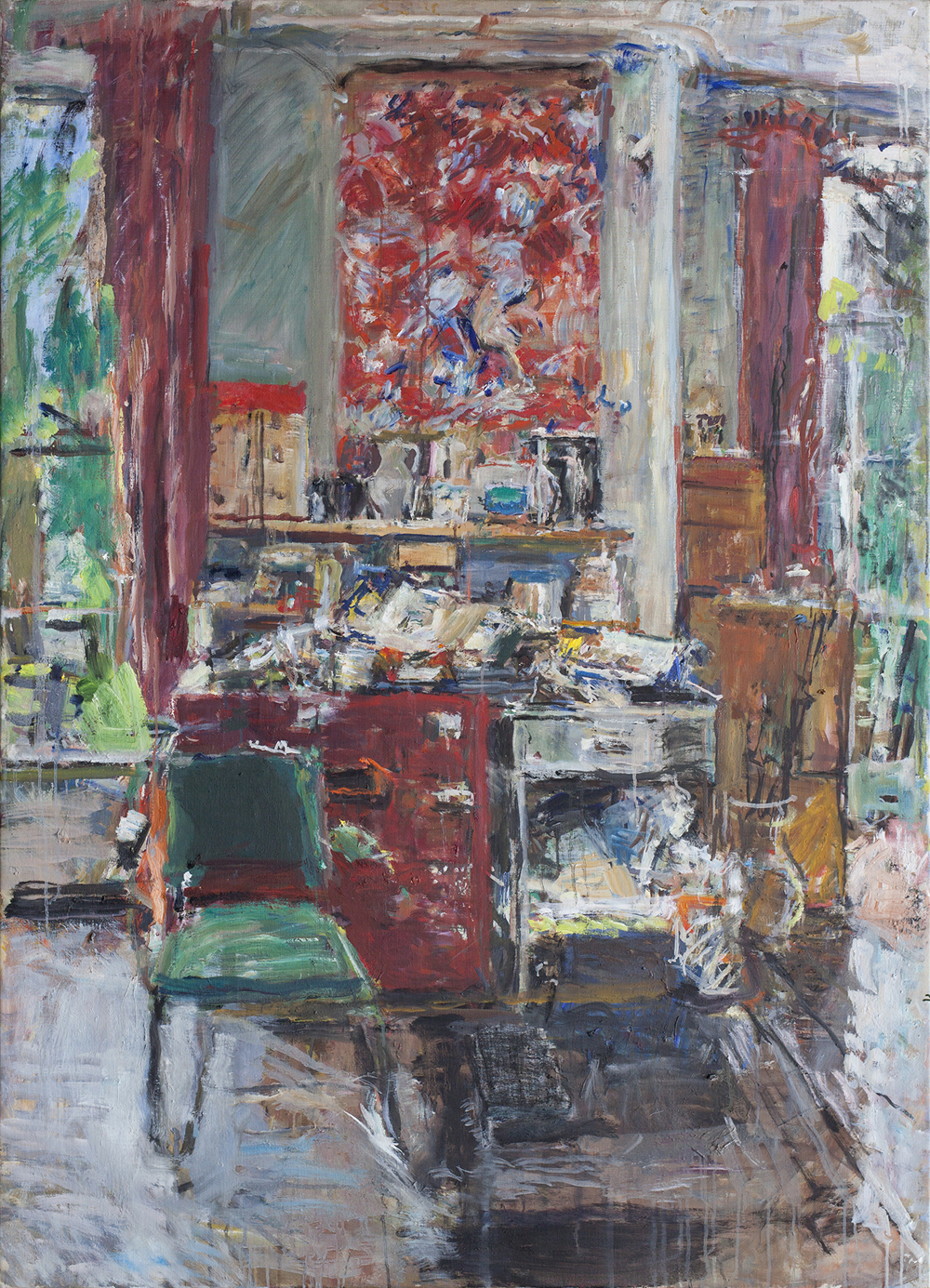 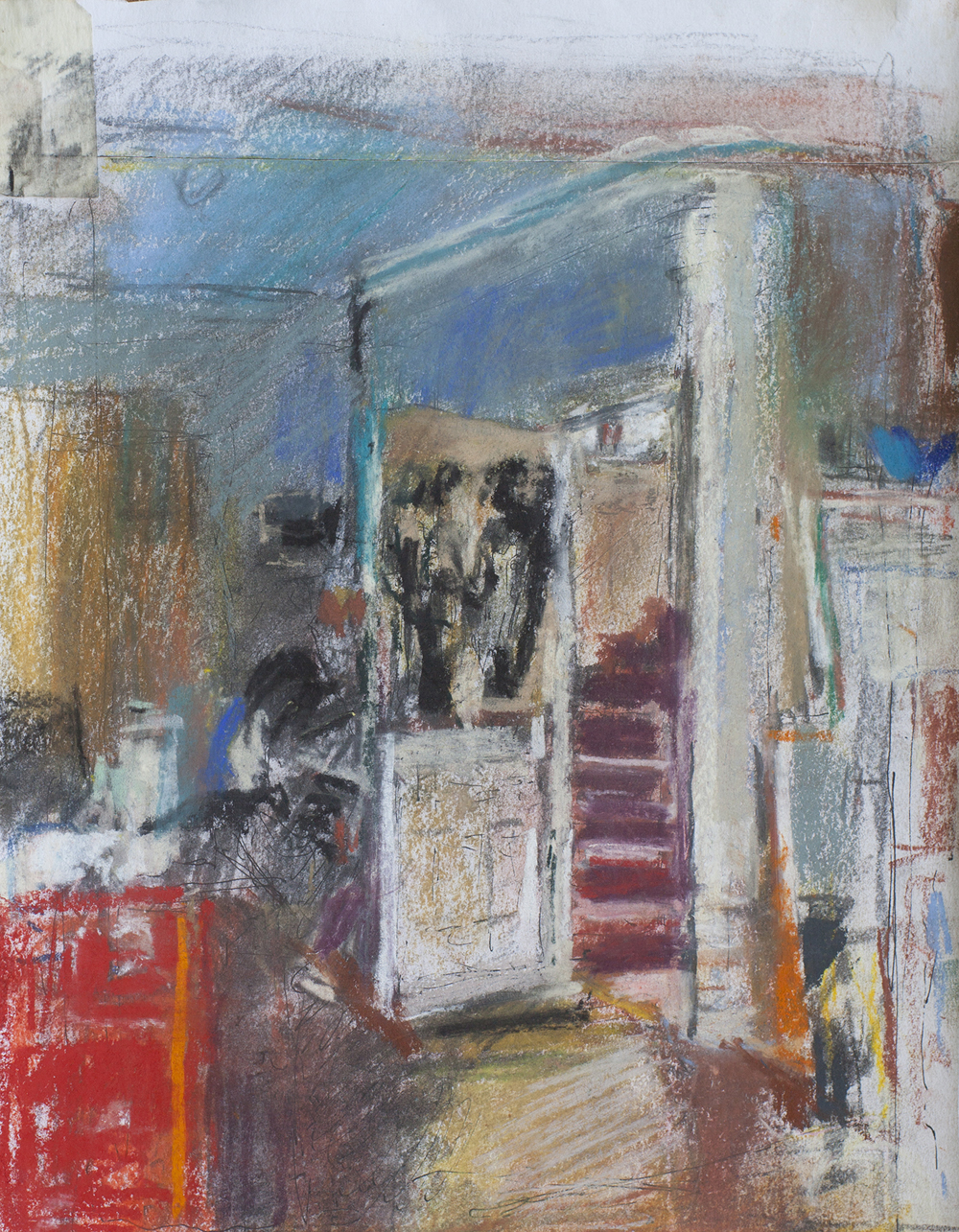 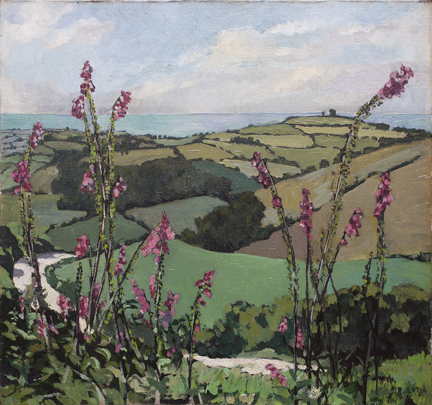 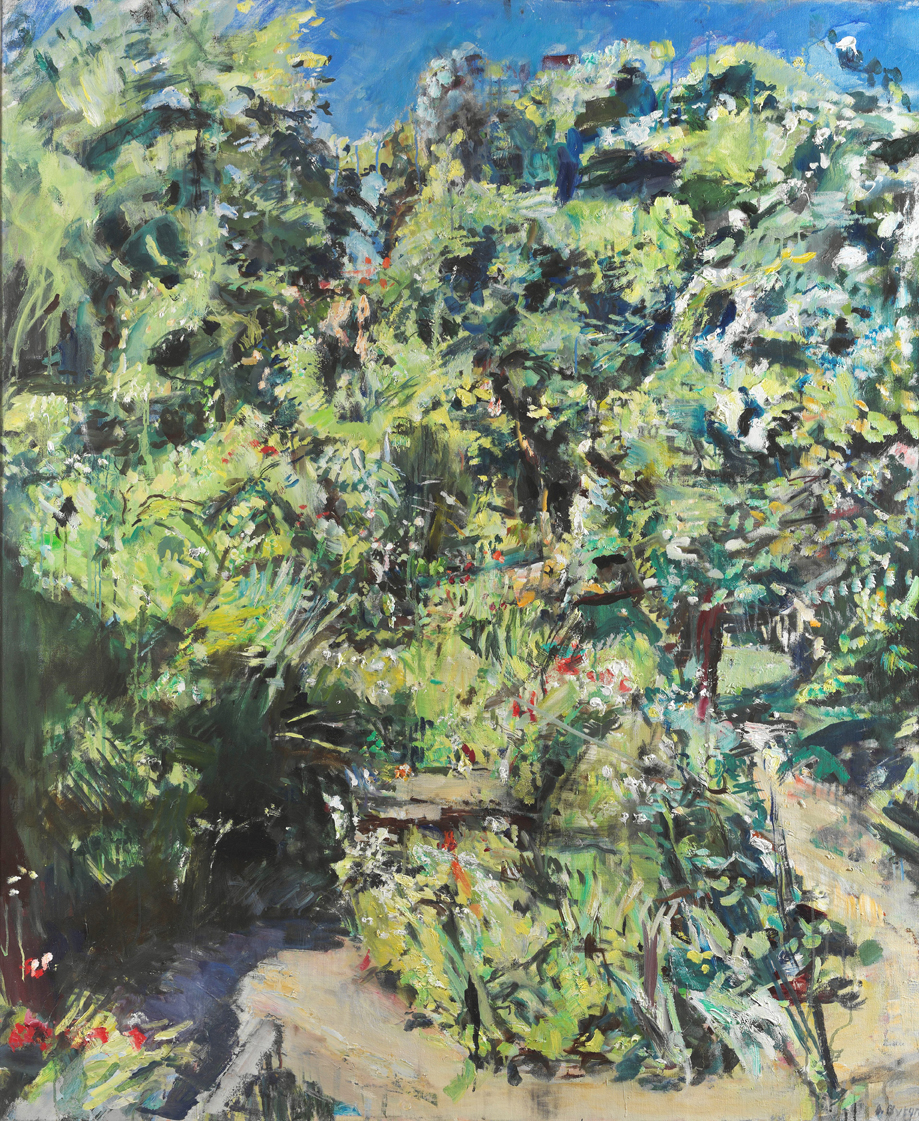 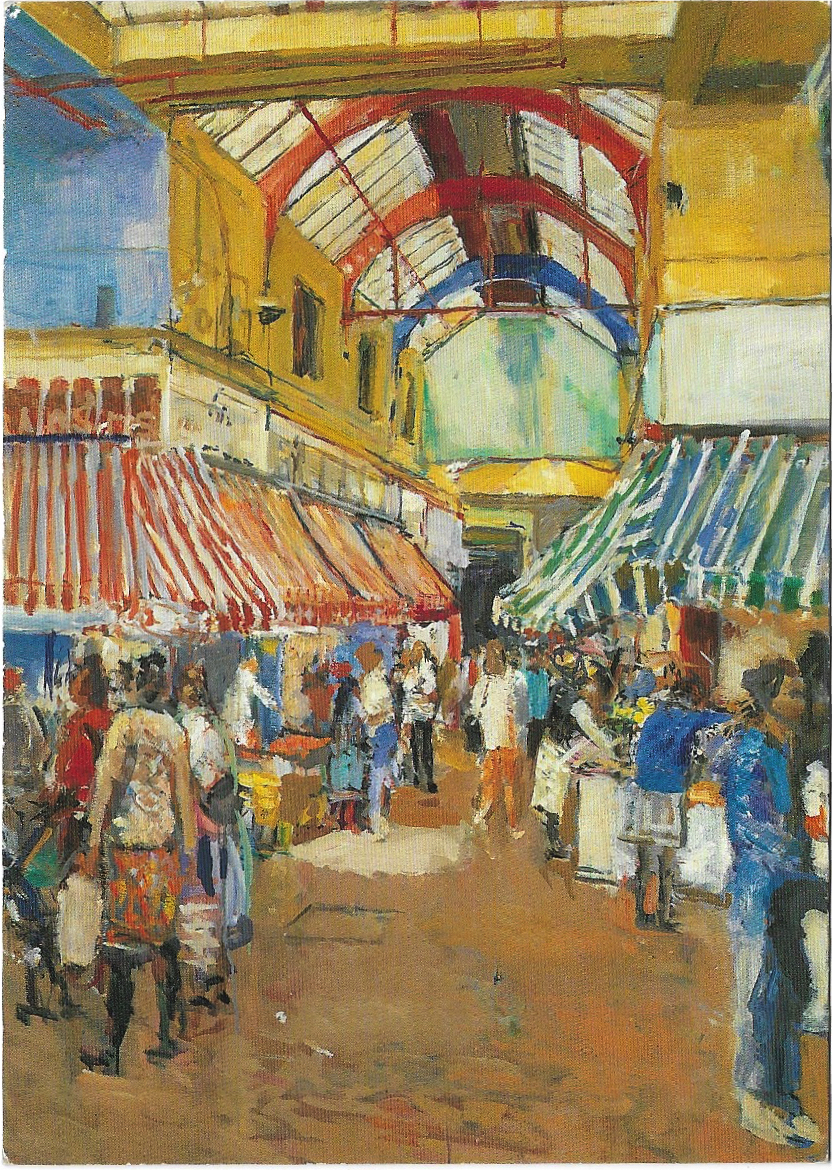