I found a reference to Barrett’s here: breweryhistory.com/journal/archive/123/Architecture.pdf in which the Barrett brewery is described thus:

“The visual image of the ‘beer factory’ had become increasingly important, with the brewery’s image being used on bottle labels and in advertisements. Barrett’s Vauxhall Brewery (1885) was an extreme example of this trend, with a 119 feet high brewhouse tower topped by a huge, illuminated revolving stout bottle.”

Although there is no tower in the photo (possibly a different part of the complex is depicted), it clearly shows two decorative beer houses at the entrance. 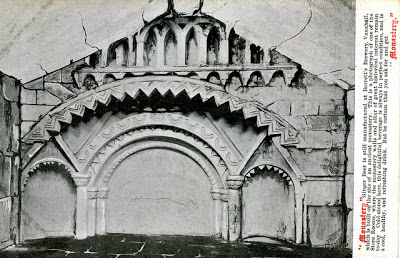 The caption on the second postcard reads:

“Monastery Ginger Beer is still manufactured at Barrett’s Brewery, Vauxhall, which is built on the site of an ancient monastery. This is a photograph of one of the Store Rooms, where the monastery walls and alter of great historical interest remain to-day. Cold-stored here, this delightful beverage is always in perfect condition, and is a cool, healthy, and refreshing drink. But he certain that you ask for and get Monastery.”

All rights reserved by Rgtx