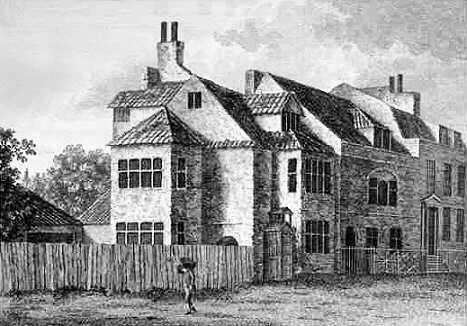 There are many illustrations of a rather quaint old house in Lower Marsh which is sometimes labelled Bishop Bonner’s House. Confusingly there are a few illustrations of a completely different building with the same title. Needless to say there is no evidence that either were anything to do with Archbishop Edmund Bonner, who became notorious as “Bloody Bonner” for his role in the persecution of heretics under the Catholic government of Queen Mary I of England, and ended his life as a prisoner under Queen Elizabeth I. From old maps it seems clear the most illustrated building stood where No. 19 now is – one view erroneously titled Bishop of Rochester’s palace shows the still standing Cooper’s health food shop in the background. On the large-scale Hodskinson and Middleton Kennington Survey of 1785 the projecting bays seen in the engravings are readily identifiable. The famous watercolour of Lower Marsh by Paul Sandby has the front of this building framing the right hand side. The other building was much grander and more architecturally distinguished. This was possibly located at No 1 Lower Marsh where a property is noted as Bonner’s House on the Enclosure plan of 1806. In Thomas Allen’s history of Lambeth there is mention of there being two buildings associated with the archbishop but rather disappointingly declares one of them didn’t look very old. It is reported that one of these houses was demolished in July 1823 and a fine Elizabethan ceiling from it ended up in Cottingham’s Architectural Museum in the Waterloo Road. There is no information whether this ceiling survived the dispersal of the museum collection in 1851.

Image from an engraving by James Peller Malcom c.1798 erroneously labelled Bishop of Rochester’s Palace: the building on the extreme right is now Coopers Natural Foods at 17 Lower Marsh, London SE1, where you can still see the
mansard roof from the back.