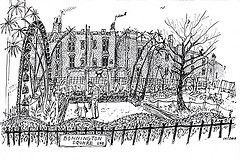 The Bonnington Square community, which emerged from the London squat scene of the Seventies and Eighties, now mostly consists of co-operative housing.

The central communal area, dubbed the “Pleasure Garden” occupies an area that was bombed in the Second World War and was a derelict playground when taken over by the Bonnington Square Garden Association, a group of local residents with backgrounds in film, art, design and horticulture. This group included the Channel 4 gardener Dan Pearson.

Further planting under the umbrella of the Paradise Project includes trees, groundcover planting, vines and endless street gardens. The Pleasure Garden is today regarded as one of the finest community gardens in London.

In 1990 a builder working in the area applied to the council to use the site as storage, which alerted the council to the fact that they owned valuable ‘idle land’ and informed the residents that the land could be sold for development. The Bonnington Square Garden Association was formed shortly afterwards by local residents and, in 1994, money became available from a joint government and local council scheme to transform the land into “a little slice of paradise”. The garden is named partly in homage to the Vauxhall Pleasure Gardens which existed 100 metres to the north of here and were a major feature of London for three centuries: a place of curiosity, promenade and play.