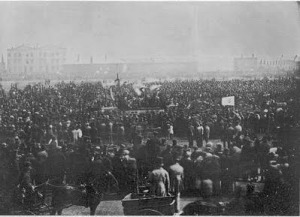 The Chartist Meeting at Kennington 10 April 1848

The Chartists were a political movement that took its name from the “People’s Six Points Charter”. This charter or petition called for: universal male suffrage, annual parliaments, payment of Members of Parliament, vote by ballot, equal electoral districts, the abolition of property qualifications for Members of Parliament (then £300 in land).

Huge meetings were held in support of the Charter. Although the Charter was signed by many thousands of people, Parliament turned down the proposals three times – 1839, 1842 and 1848.

One mass Chartist meeting was held on Kennington Common (now Kennington Park) on 10 April 1848. The Establishment became very worried at the prospect of thousands of potentially angry protesters congregating so close to Westminster and called in 8,000 soldiers and 150,000 special constables in case of rioting. These were not needed as the meeting ended peacefully. Afterwards, the meeting’s organisers claimed 300,000 people were present, while the Government claimed it was only 15,000 with various newspapers estimating the crowd to be between 20,000 and 50,000.
The Chartist leaders claimed that the 1848 petition to Parliament contained about 5.7 million signatures. Close inspection by MPs revealed, however, that it only held 1,975,496 with many of these clear forgeries. Partly as a result of the exaggerated claims and the irregularities, the proposals were laughed out of Parliament. The movement soon disbanded. It was only decades later that the Chartists’ aims became a reality. 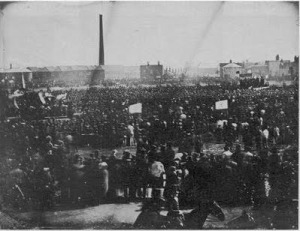 Kennington Common was the appointed place of meeting and was the great centre of attraction to all who felt an interest in the proceedings. At an early hour on Monday morning, a few straggling groups had assembled there; but, until ten o’clock, the numbers present did not amount to more than a few hundreds. The arrivals during the hour or two that followed were far more numerous, and before the approach of the delegates, the crowd consisted of several thousands. They all belonged, almost without exception, to the poorer classes, although few of them wore the distinctive dresses of labourers or mechanics. There were not among them 100 women. At half past eleven, the great procession, which included the delegates to the national convention, came in sight, and a general rush to meet it took place. This was the great spectacle of the day. First came the Chartists of Whitechapel, headed by a small banner. Then came those of the Brick Lane district; and then those of Finsbury. One of the most numerous was the “Emmet brigade,” which consisted of members of the Irish confederation. They were headed by a green banner with orange edges, the Irish harp being in the centre.

The procession was wound up by two large ornamental vans, each drawn by four horses. In the first of these vans were seated Mr F O’Connor, Mr McGrath, and other members of the national convention. The appearance of these gentlemen was hailed with loud and continued cheers. The second van contained the national petition, to which the writing on a piece of parchment indicated that 5,106,847 signatures had been affixed. Above those figures were placed the words “The people’s will.” In this van was a large coloured banner, having inscribed on it each of the six points of the charter, as well as six smaller ones.

The police force was stationed as follows:- An advanced post of 500 men was placed at Ball’s Livery Stables, Kennington, concealed from view, but ready to act at a moment’s notice, if required. The main strength of the force was concentrated at the bridges. The number of police of all ranks in position was 3,970.

To support the police, the Chelsea Pensioners, the military and artillery forces, and the special constabulary were arranged:- There were 400 of the pensioners at Battersea Bridge, 500 at Vauxhall, 200 or 300 at the Pantechnicon, and a detachment at Blackfriars.

All the public buildings were barricaded and occupied by soldiery, and the officials and clerks were armed, not only with staves, as special constables, but with fire-arms. 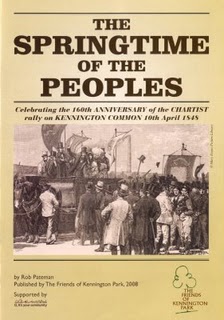 The Friends of Kennington Park have published a pamphlet – The Springtime of the Peoples – celebrating the 160th anniversary of the Chartist rally on Kennington Common.