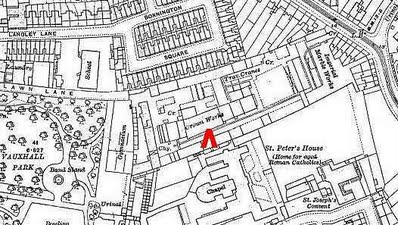 Among the many well-known business enterprises that have been associated with the Vauxhall area is the building contracting firm of Higgs & Hill which, until 1967, occupied the site now covered by Ebbisham Drive and Bannerman House. Just one hundred years before, in 1867, William Higgs, a successful building contractor whose work had included Chelsea Barracks and Spurgeon’s Tabernacle, bought the four-acre market garden site at Vauxhall. In 1870 he moved his office there and started to fit out a yard.

In 1873, wishing to retire, William Higgs proposed a merger between his son William and Rowland and Joseph Hill, the latter married to a close friend of Hiqgs’ daughter Lettie. The Hill brothers, who had just inherited their father’s building business in Islington, moved to Clapham and the new business commenced at Vauxhall in 1874. When purchasing the site, William Higgs senior had also acquired an adjoining site to the east, fronting Kennington Oval, and in 1875 he built a row of houses – now numbers 60-63 Kennington Oval and 96-106 (even) Harleyford Road – and on the land behind them, the Crown Baths, a speculative private swimming pool that was well patronised in the days before the introduction of municipal baths. The pools were heated by waste steam from the building yard’s beam engine. The baths no longer function but the building still stands and is now occupied by the marble works of Messrs J. Whitehead and Son.

The Vauxhall yard comprised workshops for carpenters, joiners, stonemasons, blacksmiths, plumbers and glaziers, an extensive timber store and stables for up to twenty horses. One of the most prestigious contracts of the new partnership was the Tate Gallery, now Tate Britain, just across the river and built between 1893 and 1897. In 1898 the firm became a Limited Liability Company. At around this time mechanics were paid 8d (3½p) per hour, painters 7¾d (3p), labourers 5¾d (2½p) and apprentices about 1d (½p) per hour.

In 1902 King Edward VII and Queen Alexandra travelled to Dartmouth to lay the foundation stone of the Royal Naval Training College. For this contract, stone from Portland was taken to Vauxhall to be dressed and then returned to Dartmouth by boat. In 1909 the company built the new London, Chatham and Dover section of Victoria Station.

During the First World War the company undertook contracts for munitions factories and gun emplacements while later production was switched to prefabricated buildings and aircraft parts. At one time about one hundred women were employed operating sewing machines to assemble the fabric coverings for aircraft wings. A piggery was also set up alongside the stables at the Crown Works to help boost the supply of home-produced food. At the end of the war a canteen was opened and shortly after this the ‘Crown Orchestra’ was formed to play at important functions as well as to entertain workers during their lunch break. A works committee was also set up, together with a sports club, and works outings were arranged. The company’s last horse was pensioned off in 1922 to be replaced by a fleet of steam- and petrol-driven lorries.

During the 1920s, Higgs & Hill was responsible for many of London’s well-known landmarks including the Park Lane Hotel, Liberty’s, Swan & Edgar, and India House, while at Chiltern Court (1929) they used a 145′ tower crane, one of the first to be used in the country. Contracts in the following decade included the London Fire Brigade Headquarters on Albert Embankment and the extension to County Hall.

Again in the Second World War, work was switched to airfields, factories and air-raid shelters, including the massive citadel in Horseferry Road that still survives beneath the Marsham Street offices of the DOE. During an air raid in September 1940 one third of the Crown Works was destroyed by fire but it was later rebuilt and the firm continued to operate there until it moved to New Malden in 1967. Post-war contracts included the completion of the Royal Festival Hall, the Queen Elizabeth Hall and the Hayward Gallery, and in recent years the company was responsible for the London Weekend Television Centre, the Croydon flyover, the restoration of Windsor Castle and a number of hospitals and university buildings, as well as numerous projects in the West Indies.

In 1996 the company announced poor results arising from re-organisation charges and contract losses and was bought by the Hollandsche Beton Groep (later HBG) later that year. HBG was itself acquired by another Dutch conglomerate, Koninklijke BAM Groep, in 2002.