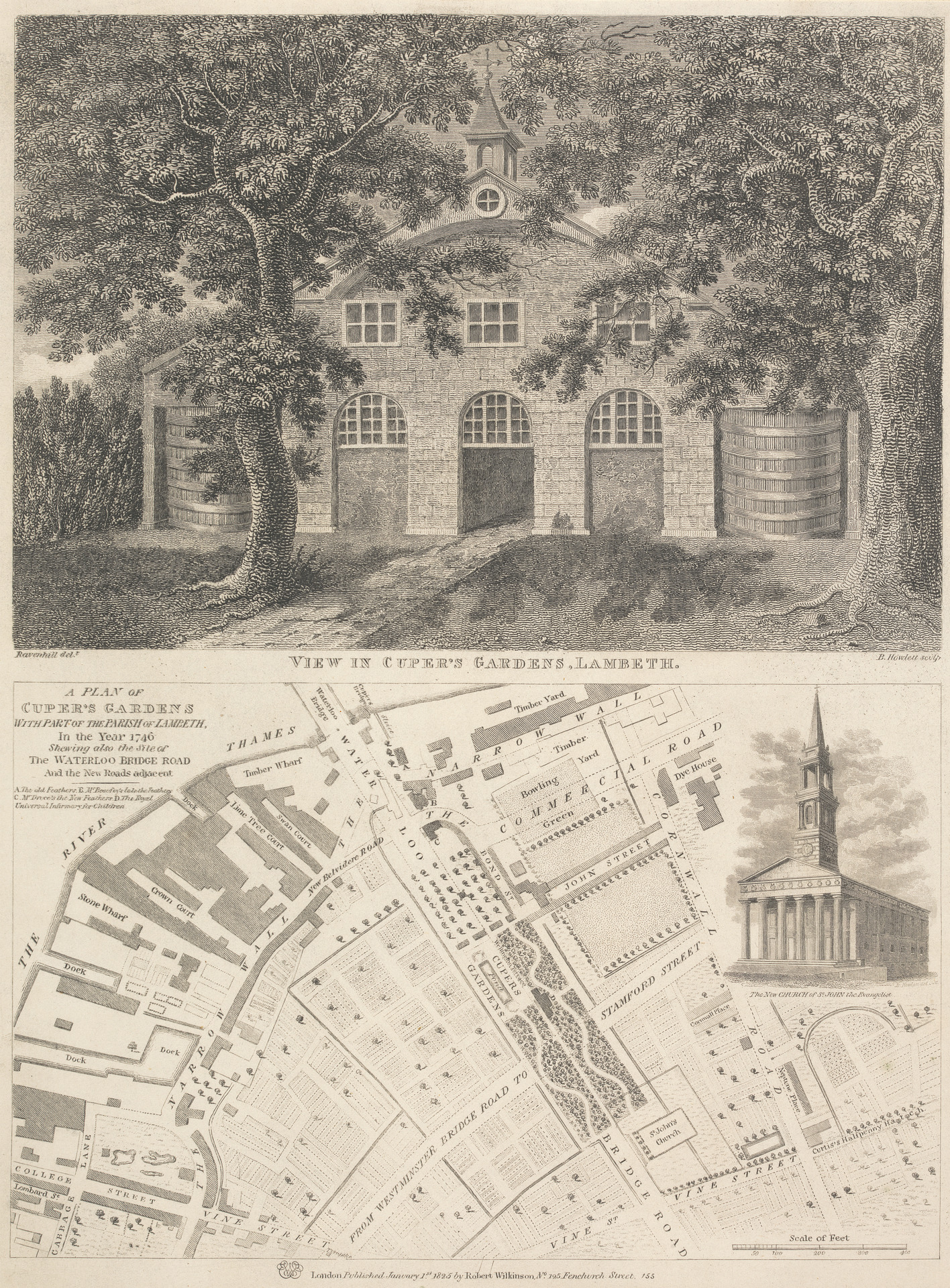 This celebrated pleasure garden, also known as Cupid’s Gardens, was originally part of Lambeth Marsh. In the late medieval period three acres of this meadowland came into the possession of the Earls of Arundel. After passing through other hands, it eventually came back in the form of a large garden to Thomas, Earl of Arundel in 1634, who also owned Arundel House across the river. The earl leased the site to an employee, Abraham Boydell Cuper, and it was either he or his son who opened it as a public pleasure garden. As an added attraction at the Gardens, Cuper acquired some of the marble statues from Arundel House when it was demolished.

In 1686 Bodwyn Cuper was granted a lease by the Archbishop of Canterbury to a seven-acre plot next to the Gardens and extended them. The grounds were long and narrow with serpentine paths among trees and bushes. On the west side was a lake. Twenty years later Edward Hatton described them as “pleasant gardens and walks with bowling greens whither many of the westerly part of the town resort for diversion in the summer season.”

At the end of March 1738 it was announced that Mr Ephraim Evans and Mr Jones of the Hercules Pillars, Fleet Street, had taken up Cuper’s Gardens and the adjoining Feathers Tavern. In the following year the summer season started on 4 June with a concert of music, a manner that was to continue each evening. The gates opened at 4pm and entrance was 6d. New walks were laid out within the Gardens and the best food and wine were available. To improve the ambiance, Evans had a magnificent music pavilion erected and an organ installed. The musical entertainment began in late April 1740 and continued for three months or so. The orchestra played each evening between 6pm-l0pm, and the Gardens were illuminated throughout. A thousand season tickets, costing 1 guinea each, were to be issued which would admit two people at one shilling (5p) each visit. 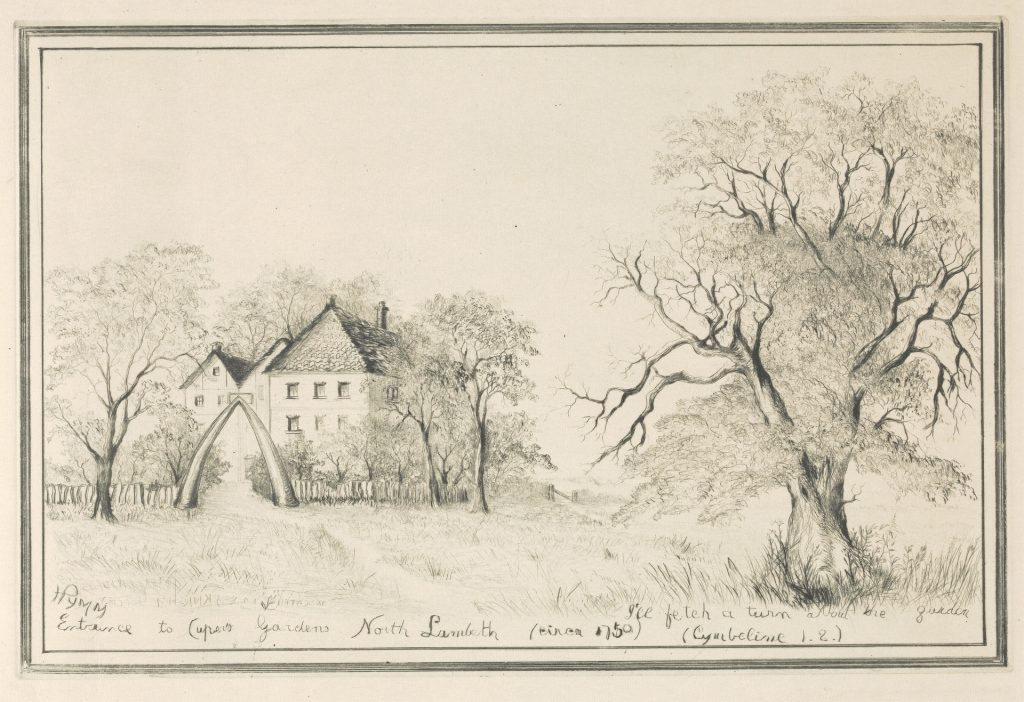 Unfortunately, Evans died in 1740 at the height of his achievement, but his widow endeavoured to keep the Gardens flourishing. Many fashionable people frequented them, including the Prince and Princess of Wales. Newspaper advertisements in the 1740s extolled the delights on offer to visitors, announcing in 1741 Handel’s “Music for the Royal Fireworks” complete with firework display, while on 28 June 1743, a spectacular firework display called “The Gorgon’s Head” was presented for the first time in this country. Three years later, there was a celebration of the Duke of Cumberland’s victory at Culloden. On 1 May 1749 the temple and fireworks previously seen at Green Park to mark the Peace of Aix-la-Chapelle were reproduced. And on 9 June 1752 a firework display marked the Prince of Wales’ birthday.

Despite its one shilling (5p) admission charge, the Gardens also attracted pickpockets and other undesirables. In 1753 it fell under the ban of an Act to combat theft in places of public entertainment and its license was refused. Mrs Evans continued to run it, however, as an unlicensed tea garden in conjunction with the Feathers Tavern. She held private evening concerts and firework entertainments for subscribers, but the Gardens finally closed in 1760.

Mark Beaufoy, a vinegar merchant, soon took possession of the land, and later, in 1813, some of it was bought for the approach road that was to become Waterloo Bridge.

More information at All Things Georgian.