In 1812, John Henry Beaufoy moved his vinegar brewery from Cuper’s Gardens to South Lambeth. The Cupers site was needed for the new Strand Bridge, which was later called Waterloo Bridge, and Beaufoy was well compensated for the inconvenience of moving. The first Beaufoy to enter the distilling business was Mark, who in 1730 had been apprenticed to Joseph James, a distiller in Bristol. By 1741, he was taken into partnership and the company was known as Beaufoy, James and Co.

The family traced its descent from the Norman Conquest and became established at Evesham, where an earlier John Beaufoy had been a maltster. Mark Beaufoy, a Quaker, went to Holland early in his career to study continental methods of brewing vinegar. It is said that he rejected the distilling of gin after seeing Hogarth’s picture of Gin Lane.

One gin recipe of the period was as follows

It is estimated that approximately five million gallons of gin made from recipes similar to the above were consumed in 1735. 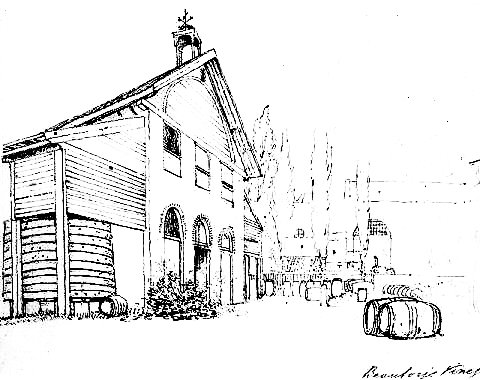 In 1743 Mark married Elizabeth Hanbury, and three years later they settled at Cuper’s Gardens. The earliest surviving document shows that in 1747 the plant held 30,000 gallons of vinegar, which was valued at 5d a gallon. In 1756 Mark acquired the Navy contract in the face of considerable competition and vested interests; with this contract, Mark provided ‘ship’s stores with a fumigator, an antiseptic and preservative’. In addition, from 1761, the company became concerned with the production of “sweets”, which is the original term for British wines, and the Beaufoys were among the foremost producers. When Mark died, John Hanbury Beaufoy took over and by 1820 had full control of the company. He died in 1836 and left the business to his nephew, Henry Benjamin Beaufoy; Henry also collected books, among which was a first folio Shakespeare. George Beaufoy RN succeeded to the business in 1851 and when he died in 1864, left the business in trust for his ten-year old son Mark Hanbury Beaufoy. In 1922, six years after Mark’s death, the company amalgamated with Grimble & Co and in 1932 British Vinegars was formed with George Maurice Beaufoy as first chairman.The family energy was not only directed to the distilling of vinegar. In 1800 Henry wrote Scoloppetaria, or Considerations on the Nature and Use of Rifled Barrel Guns with Reference to their forming the Basis of a Permanent Defence Agreeable to the Genius of the Country. The Gentleman’s Magazine in 1799 considered: ‘This valuable acquisition to the Military Library is highly creditable to his talents as a scholar and a soldier.’ His knowledge of ballistics and his observations during an aerial voyage in a balloon secured his election to the Royal Society in 1811.

By 1841, Vauxhall had become a haven for the destitute who crowded into the district looking for work. The rural days for South Lambeth were over and the well-to-do moved out. Henry Beaufoy was deeply concerned for the poor and their need for education. He built and endowed the Ragged School for Boys and Girls in what is now Newport Street, and made benefactions to the City of London School amounting to £9,000. He gave awards and scholarships, including one scholarship in memory of his father that was ‘designed to encourage the study of mathematical science, with an especial reference to its practical application to the use and service of mankind’. When he died in 1851 he was buried in St Mary’s churchyard, Lambeth. His stone has since been moved.

Mark Beaufoy was MP for Kennington, and supported not only the reduction of the working day but also the introduction of the eight-hour day; he quickly introduced the latter into his own works. In 1881 he chaired a meeting in his home at which the Waifs and Strays Home was started, based at St Anne’s, South Lambeth – today’s Children’s Society. The moving force was Edward de Rudolph, the Sunday School Superintendent at St. Anne’s. The aim of the meeting was ‘to rescue and care for children who are orphaned, homeless, cruelly treated or in moral danger, and to relieve over-burdened homes’. The first home was opened at 8 Stamford Villas, Dulwich, and the Archbishop of Canterbury was the first President. In the first ten years of the venture, 2,943 waifs and strays had homes found for them.

The Beaufoy vinegar yard has been described as follows: “Two small lodge houses stood at the end of a tree-shaded drive, one still remains bearing the Beaufoy arms above the loggia, the top of which is appropriately decorated with grapes. The functional aspect of the vathouse which was the chief building in the yard, is concealed by a handsome facade. The delicate white cupola above the clock in a wooden rusticated stage would not have looked out of place in the courtyard of a Bohemian hunting lodge.

On 10 May 1941 a bomb destroyed the splendour of the library and the principal living rooms. In this raid, George Maurice, the last of the Beaufoys to manage the concern, was killed. Caron Place, the dwelling house where the Waifs and Strays was formed, was also damaged by bombs.

To the rear of the dwelling lay the wine vaults and the cooperage which, in contrast with the silent vathouse, echoed with hammerings and the rattle of pebbles used to clean the casks. The old ballroom had become a filling line. Prior to closure almost three hundred people worked in the yard and offices and production ran to millions of gallons each year of vinegar. Worcester sauce, mustard and mayonnaise were also distributed from here.

This article is based on The Beaufoys Vinegar Yard by Rachael Gaunt, 1978