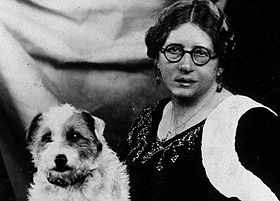 Lilian Baylis was born in London into a family that ran a concert party, the Gypsy Revellers. In 1891 the family emigrated to South Africa where Baylis worked as a teacher of music and dance. When she returned to London in 1989 she jointly ran the Royal Victoria Coffee Music Hall in London (a temperance music hall, which was later known as The Old Vic), with her aunt Emma Cons. She was a determined individual with a slightly eccentric character.

Following Cons’ death in 1912, she took over the management of the theatre and started a series of performances of the classics, by the acting company she founded (also call the Old Vic company). Seats in the Old Vic were priced low to attract new theatregoers and she quickly earned a reputation for popularising Shakespeare. In 1924 she was granted an honorary MA from Oxford University, in recognition of her services to theatre.

From 1931 she took over the Sadler’s Wells Theatre in north London where she planned to run the same type of performances as at the Old Vic but soon realised that ballet was attracting larger audiences so she co-founded the Sadler’s Wells Ballet Company with Ninette de Valois. For much of her life she lived at 27 Stockwell Park Road where she died in 1937. In the 1990s when Sadler’s Wells was rebuilt, the theatre was dedicated to Baylis in recognition of her role in establishing one of England’s foremost ballet companies.