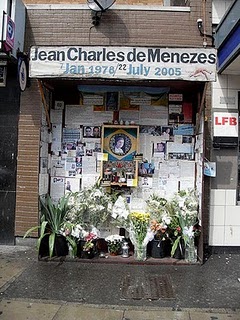 The temporary tribute to Jean Charles de Menezes. It has since been replace by a permanent plaque.

Jean Charles de Menezes, a Brazilian, was shot by undercover police on an underground train at Stockwell station on 22 July 2005, after he was misidentified as one of the fugitive terrorists involved in the previous day’s failed bombing attempts in London (they were subsequently caught and jailed).

De Menezes’s death sparked debate and controversy surrounding the way police had identified his appearance and bungled their surveillance operation. Plain clothes officers, having previously mistaken him for a man who lived in the same housing block in Tulse Hill, followed him as he took a bus to Brixton tube station, after which he boarded another bus to Stockwell tube station because the tube station at Brixton was closed. Specialist firearms officers were called to Stockwell and just after Menezes entered a train, one of them shot him dead. The train was still at the platform with its doors open.

Two inquiries were held, Stockwell 1 and Stockwell 2, both of which concluded that none of the officers should stand trial. However, the police service was prosecuted for failing in its duty of care to de Menezes and in November 2007 it was found guilty and fined, although the jury added that the operational commander on the day, Cressida Dick, bore “no personal culpability”. After Stockwell 2 Sir Ian Blair, head of the Metropolitan Police, came under pressure to resign. An inquest returned an open verdict on de Menezes. It had been told it would not be allowed to bring back a verdict of unlawful killing.

Several books, songs, TV programmes, plays and films were created after de Menezes’ death, including ITV’s Stockwell (a docu-drama) and This Much is True, a play by Paul Unwin. His shooting is also the subject of one of the songs on musician Nitin Sawhney’s 2008 CD London Undersound.

At Stockwell a shrine was almost immediately built, with flowers, notes, candles and tributes. It was replaced in January 2010 with a permanent mosaic.