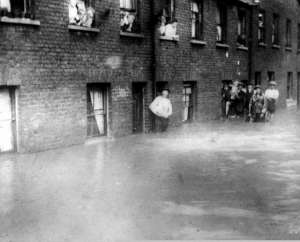 Vauxhall and areas to the south are in the Thames tidal flood plain and the risk of flooding is increasing. The sea level is rising by about 2ft (60cm) every hundred years owing to a number of factors including:

Historically the Thames has flooded parts of the area on numerous occasions including 1236 when it overflowed “and in the great Palace of Westminster men did row with werries in the midst of the Hall”. Pepys’s diary for 7 December 1663 recalls “there was last night the greatest tide that ever was remembered in England to have been in this River all Whitehall having been drowned”. The last time that central London was flooded was on 6-7 January 1928 when a northerly gale caused water levels in the Thames to rise which led to the collapse of a section of the embankment near Lambeth Bridge. The Thames flooded into the basements of nearby houses so quickly that people were unable to escape and 14 people drowned. (Luckily the area was spared the terrible floods of 1953 when over 300 people died.)

The risk of flooding is dramatically increased when a low level weather ‘trough’ moves across the deep Atlantic. The water under the low pressure ‘trough’ rises to form a hump of water which can be up to 100 miles wide. If, after passing the north of Scotland, the ‘trough’ should veer southwards the hump of water is squeezed along the relatively shallow sea floor between the coast of England and the continent thus causing it to ‘surge’. The height of this ‘surge’ can be aggravated by strong northerly winds. It is at its worst if the ‘surge’ coincides with the twice monthly high spring tides which are caused when gravity from the sun and the moon are both pulling the sea in the same direction. When the surge reaches the bottleneck of the Dover straits the high water flows up the narrowing Thames Estuary towards London.

The area is today protected by various flood defenses include the raised and strengthen river walls and embankments built following the Thames Flood Act of 1879 and the Thames Barrier which became operational in 1982. The Thames barrier has been raised on average twice a year since 1982 but current predictions suggest that by the end of its planned life in 2030 this number could be 30 per year.