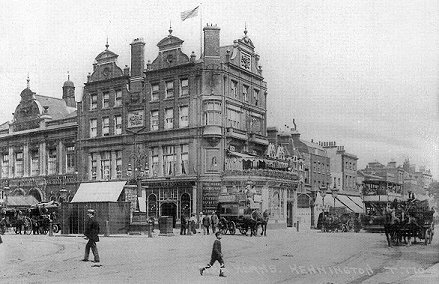 The Horns Tavern, rebuilt several times in its history, stood at the junction of Kennington Road and Kennington Park Road, opposite the Post Office. Not only was it a place of drinking and entertainment but it also acted as a good meeting place and as a lecture hall and exhibition space. The court of the Manor of Kennington met here in the 18th century and Surrey Cricket Club was founded here in the 19th century. The building was rebuilt in 1887. It suffered bomb damage during the Second World War and the remaining building was demolished in the 1960s.