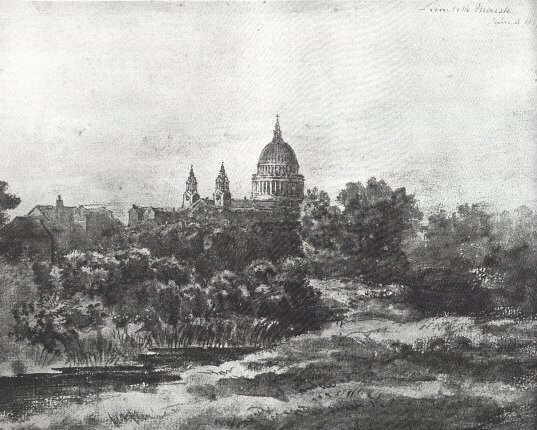 Patrick Nasmyth had an early love of nature and often played truant from school to sketch the surrounding countryside. He later studied under his father and his talents were soon recognised, although an early injury compelled him to learn the use of his left hand for painting and an illness resulted in total deafness.

He moved to Lambeth in 1807 where he specialised in landscape subjects painted in both oil and watercolour. His work was compared to paintings by Dutch 17th-century artists and he became known as the “English Hobbema”‘ (Meindert Hobbema, the Dutch landscape painter 1638-1709). He first concentrated on Scottish scenery, but later painted the English landscape, depicting wooded lanes, commons and rural cottages. His scenes tended to be intimate rather than grand vistas although he took particular pride in his depiction of skies. He often sketched in the vicinity of Lambeth at a time when much of it was still country.

According to his brother,

“the immediate neighbourhood of London abounded with the most charming and appropriate subjects for his pencil. These consisted of rural ‘bits’ of the most picturesque but homely description – decayed pollard trees and old moss-grown orchards, combined with cottages and farm-houses in the most paintable state of decay, with tangled hedges and neglected fences, overrun with vegetation clinging to them with all ‘the careless grace of Nature’.  However neglected these might be by the farmer, they were always tit-bits for Patrick. When sketching such subjects he was in his glory, and he returned to his easel loaded with sketch-book treasures, which when painted form the gems of many a collection. In some of these charming subjects glimpses of the distant capital may be observed, with the dome of St. Paul’s in the distance; but they are introduced with such skill and correctness as in no way to interfere with the rural character of his subject…”

He achieved considerable success and his paintings were much sought-after. He exhibited in Edinburgh from 1808 to 1814, and first exhibited at the Royal Academy in 1811, becoming a founder member of the Royal Society of British Artists in 1824.

His loss of hearing affected his health and living alone he failed to take care of himself. On one sketching expedition he caught a cold having scarcely recovered from influenza and his strength gave way. He died at Lambeth on 17 August 1831, during a thunderstorm, which at his own request he had been raised up in his bed to watch. He was buried at St. Mary’s Church and fellow Scottish artists in London placed a gravestone over him.

Examples of his works may be seen in many private and public collections including the British Museum; the Victorian and Albert Museum; Williamson Art Gallery, Birkenhead; The Fitzwilliam, New Gallery, Scotland and the Newport Art Gallery.