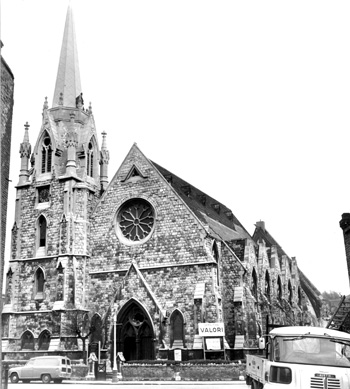 On 23 April 1861 the original church – built on “a waste piece of ground at the back of Albert Square” – held its first service. According to archiseek the architect was one John Bennett. He created a massive building which dominated the terraces that grew up around it.

The church could seat 1,200 people which must made the services there in 1958 rather dispiriting when attendance had fallen to just seven people. Not surprisingly 19 clergy turned down the opportunity to take over the parish before one redoubtable Rev Carroll took up the gauntlet and reversed its fortunes. But even his congregation of 200 (mostly children) was dwarfed by the building that was anyway deemed to have reached the end of its life.

So in 1967 a building firm was given a contract to demolish and rebuild the church and vicarage in exchange for a 99 year lease on the rest of the land to build flats. The photograph from Ideal Homes was taken on 6 November during the early stages of demolition (The sign says “DEMOLITION VALORI”). 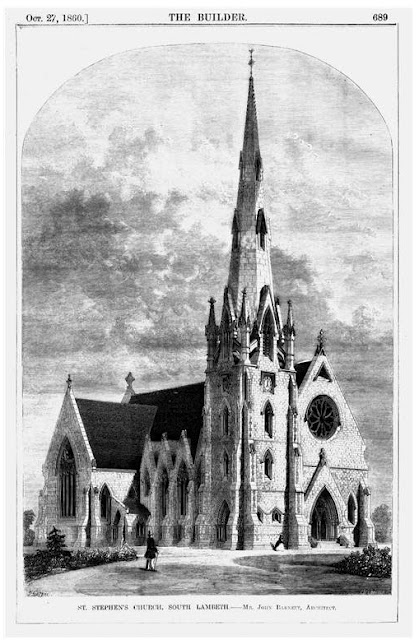 The building that replaced it was something of a failure in terms of “fitness for purpose”. As the photograph below shows, the architect had not really bothered to include much in the way of fenestration.

A “Church Without Walls” (or “Church With Windows” would do) project in the late 1990s replaced the vertical slits with larger windows. The reception area was also added at this time.

The new church of St. Stephen, South Lambeth, which will be opened for Divine service in a few days, stands on a site at the back of Albert-square, in part the gift of the copyholder, T.W. Williamson, Esq., and enfranchised by the Dean and Chapter of Canterbury. It was erected at the cost of the Rev. Charles, Kemble, M.A., Rector of Bath, from the designs and under the superintendence of Mr. John Barnett, of London.  The plan of the church is to some extent cruciform, terminating with transepts, small chancel, and vestry eastwards. The following details are extracted from the Builder :- The principal entrance is at the went end, and there is a side entrance in the west wall of transepts, north and south. The entire length is 122 feet : the nave is 45 feet wide, and is 55 feet high from floor to ridge of roof. The roof of the nave is continued through the transepts by moulded Gothic arches, springing from foliated caps and moulded columns carried on carved corbels. The extreme length of transept is 88 feet : it is 36 feet wide, and 45 feet in height from floor to ridge. The vestibule at west entrance is 12 feet by 8 feet, with inner lobbies, north and south, 11feet by 8 feet. The vestibule entrances on the north and south sides are 9 feet by 5 feet with inner lobbies 9 feet by 6 feet. The chancel is 22 feet by 13 feet, and 40 feet in height; with a vestry on the south side 20 feet by 12 feet, and 17 feet in height. The tower is 14 feet square, and in four stages 53 feet in height. It has octagonal pinnacles at the angels, with gabled belfry, surmounting the square base. The entire height of tower and spire is 140 feet. The tower is divided internally with three floors  the lower part is occupied by stairs leading to gallery for children and organ-loft, over front vestibule. The first floor is a library, approached by a circular staircase in the angle forming the thickness of wall and buttress : the second floor is a clockroom, from the same staircase; and the belfry floor terminates the square part of the tower. The walls are built of Kentish rag and Bath stone dressings. The nave, in one span, is lighted by five gabled windows, 22 feet high, terminating in the roof. The transepts have large traceried windows, 14 feet 6 inches wide. A rose window is introduced over the principal entrance and another over the chancel, with side tracery windows. The gables of nave, chancel, and transepts are surmounted by crosses, and the carving to these and bosses to labels were executed by Mr. Myers,, the contractor. The roof is supported by six arched principals, springing from a small column of red Mansfield stone, corbelled from walls on each side of the church, and the transepts by similar principals. The transept windows are glazed with stained glass, by Messrs. Baillie and Co., of London ; and the other windows with sheet-hammered glass, coloured and marked with diamonds. The body of the church will seat 1000 persons. The gallery will seat 400, and is to be used only for children and an organ, which is being built by Messrs. Hill and Son, of Euston-road. The total cost of church and parsonage-house will probably be £15,000.

This article is based on one published on Tradescant Road and South Lambeth blog.