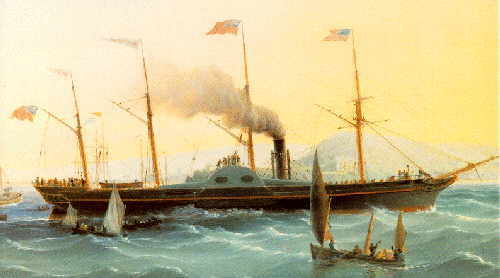 The Great Western was the first of the three steamships for which Isambard Kingdom Brunel was responsible. This wooden paddle steamer was launched from the yard of Patterson & Mercer in Bristol on 19 July 1837 and sailed to London later that month to have its machinery fitted; the two side lever engines and four flue type boilers were constructed and installed by Maudslay Sons & Field of Lambeth. Great Western sailed from Bristol on her maiden voyage on 8 April 1838, arriving at New York on 23 April, Saint George`s Day.

Great Western completed 45 Atlantic voyages to New York for her original owners, The Great Western Steamship Company, before being sold to The Royal Mail Steam Packet Company for its service between Britain and the West Indies and subsequently to South America. The sale was forced in order to raise funds to salvage the company’s other ship, The Great Britain, from Dundrum Bay. Following service to the West Indies and South America, Great Western was employed as a troop transport during the war against Russia in the Crimea; she was withdrawn for scrapping in August 1856, being scrapped at Castles’ yard Vauxhall on the Thames. (Source Dr Denis Griffiths)