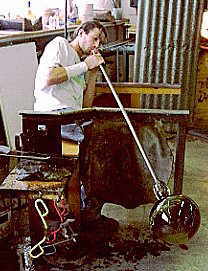 Glasshouse Walk (formerly Glasshouse Street), just off the Albert Embankment, is now the only reminder that the glass making industry was once an internationally important industry in Vauxhall.

Glass-making was first introduced to Britain by the Romans, who started blowing glass into moulds, thus allowing a wide variety of shapes to be made, including the first glass windows around 100 AD. Indeed, the Italians, and particularly Venetians, remained pre-eminent in the glass industry for many hundreds of years. They originally made their glass by heating silica (sand) with sodium carbonate (“soda ash”), although many glassmakers eventually used potash (potassium carbonate) in place of soda ash. (Soda ash and potash are the major components of wood ash, but also occur as mineral deposits.)

The Venetians protected their technology very successfully, including when working abroad, and grew rich on its proceeds. But foreigners began to challenge Italian dominance through various innovations from the 1600s onwards. For instance, a British patent was granted to Sir W Slingsby in 1610 for burning coal instead of wood in glass furnaces. The use of wood was then made illegal in England and, in 1617, Sir Richard Mansel acquired the sole rights for making glass throughout the country. Most monopoly rights and patents lapsed during Oliver Cromwell’s Protectorate (1649-1660) but, in 1663, the Duke of Buckingham, although unable to obtain a renewal of the monopoly, secured a ban on the importation of much specialised glass, thus paving the way for his own investment in glass-making in Vauxhall (1670) and Greenwich.

Buckingham’s glassworks employed Venetian craftsmen to make mirror glass up to about 1 metre long, and the works continued to make glass until around 1780. In the meantime, other glasshouses faced increasing competition from another innovation, lead crystal (“flint glass”), which was developed by the English glassmaker George Ravenscroft in the 1670s by substituting lead oxide for part of the potash then used to make high quality glass, and Buckingham’s Greenwich glass house was forced to close soon afterwards. Further up river, however, another glassmaker John Bellingham returned from Holland to begin making “Dutch” lead glass in Vauxhall in 1671, initially in partnership with, and soon in separate premises from Buckingham.

Why Vauxhall? In part, this was because the fumes from glass works were highly polluting and so glassmaking was prohibited anywhere near the City of London. Also, the nearby river was also very useful for transporting coal and sand to the works.

Buckingham, by the way, was quite a character. He was a royalist who benefitted after the restoration from his prior support for Charles II. And he favoured religious toleration, earning the respect of William Penn, the Quaker who went on to found Pennsylvania. His highs included being reputedly King Charles II’s richest subject and later being appointed Chief Minister and then Chancellor of Cambridge and High Steward of Oxford Universities. His lows, however, were many. He was imprisoned in the Tower of London at least twice and his tenure of high office was said to be chiefly marked by scandals and intrigues. He left children, but none of them were legitimate so his title died with him.

Interestingly, from Vauxhall’s point of view, Buckingham dabbled in chemistry (“a chymist”) and this probably led to his interest in glassmaking. Overall, however, he was judged (including by himself) to have wasted his life. He was said to be “A man so various that he seemed to be not one but all mankind’s epitome: stiff in opinions, always in the wrong … Was chymist, fiddler, statesman and buffoon”. And on his deathbed he declared “O! what a prodigal I have been of that most valuable of all possession – Time!”

Photos by Ester Segarra (email: ester@e-segarra.com) and used with her kind permission and that of The London Glass Blowing Co. © All rights reserved