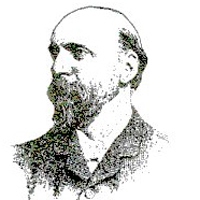 The following article appeared The Vauxhall Society’s Newsletter in April 1985.

Sir Ernest George was one of the most successful of the later Victorian architects. Specialising in domestic buildings, his style was notable for the use of red brick and terracotta and his attention to details such as ironmongery, perhaps inherited from his father, a prosperous ironmonger.

Born on 13 June 1839, just off the New Kent Road, his family later moved to 36 Albert Square where he lived during his student days. At school he developed an interest in architecture and was articled to the architect Samuel Hewitt of the Adelphi, winning the Royal Academy Gold medal in his final year, 1859. In 1861 he went into partnership with Thomas Vaughan and later formed, with Harold Peto, one of the most successful architectural practices of his day.

Many eminent architects of future years served the practice as pupils including Edwin Lutyens. After he married in 1866 he moved to Crown Hill, Croydon, and in 1888, after his wife’s death at the age of 34, he built ‘Redroofs’ in Ryecroft Road, overlooking Streatham Common, where he lived until 1903.