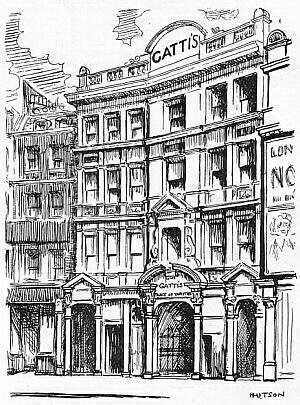 The Italian Gatti family established a chain of inexpensive restaurants and cafes, which were successful until superceded by the Lyons’ teashops in 1894. The best known of the Gatti restaurants was in the Strand. Another was opened in Lambeth in 1862. It incorporated a music hall three years later, but to distinguish it from the similar arrangement at Charing Cross, it was called “Gatti’s-in-the-Road” or “Gatti’s- over-the-Water”.

The site was 214-216 Westminster Bridge Road, just to the west of the railway bridge from Waterloo. It was soon an important music hall venue, with the Great Vance, who was George Leybourne’s rival as London’s top writer and performers of comic songs, appearing there in June 1867 -and no doubt on other occasions. In December 1868 the hall was redecorated and gilded.

But to match its growing success, the hall was fully rebuilt in 1883. The architect was Mr Bohon of Lincoln’s Inn Fields, and the contractor, G.Gaisford. The façade was concave to match the curvature of the road at that point. It stood four storeys but was of a rather unremarkable appearance. The dressing rooms behind the small stage measured only 10 ft square. There was one for male and another for female artistes. Entrance tickets were in the form of metal tokens which entitled the patron to a seat and a beer. Men were not allowed in without a collar and tie, and a shop opposite did good trade selling paper neckwear. The capacity was 1,183, with 454 seats in the stalls and 236 seats in the balcony – the rest presumably stood.

The chairman sat in front of the stage to introduce the acts. The best known chairmen at Gatti’s were Tom Kinsley and Ben Baker. The latter occasionally was obliged to do a turn himself should the artiste not arrive. This probably often happened with artistes maximising their talent by appearing at several venues each night, rushing from theatre to theatre.

It would need much research to bring together a list of productions at Gatti’s, since few programmes have survived. It may be assumed that all the stars appeared there: Dan Leno, Marie Lloyd, George Leybourne, Little Tich, have been so listed. But Gatti’s main claim to fame is that Harry Lauder made his first London performance there in 1900. The Scots comedian had previously worked in the provinces, but at the age of 30 broke onto the London scene with an Irish comedy song. While Sir Harry was later to become a star, fame for others proved more transient: Johnny Trundly, Peckham’s Fat Boy weighing 11 stone, was only 5 when he appeared on the stage in 1904 – presumably as a freak.

Meanwhile the restaurant was still part of the set-up next door at 218, and in 1900 boasted of a billiard salon. It is not certain exactly when Gatti’s became a cinema. To some extent its entry into this field was early. A programme for December 1898 had the Edison-Thomas Life Size Pictures as part of the show. Early cinematograph presentations were limited by their short length, rendering them unable to sustain a story line – giving just visual “gags” or news clips. In 1904 the cine system at Gatti’s was the Mutograph, with a change of programme each week, but still part of the variety bill. Some time after the First World War the venue turned its attentions to full length feature films. In the 1930s it had changes of programmes every Monday, Thursday and Sunday. Prices were 6d in the pit and 4d in the gallery. The theatre was damaged by bombing in 1940 and it was demolished in 1950 to make way for a new road.