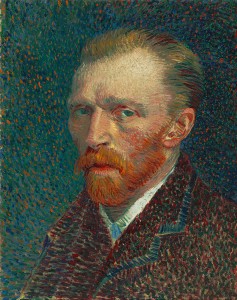 Vincent van Gogh moved to London in May 1873 at the age of 20 and lived intermittently in the city until 1876. During this time he is known to have visited, and written about, several of the Royal Academy of Arts’ Summer Exhibitions, Christie’s and iconic sites including St Paul’s Cathedral and Hampton Court. He also worked as a teacher in schools in Isleworth and Turnham Green and delivered his first sermon at a Wesleyan Methodist Church in Richmond Church.

19 May 1873 – Van Gogh starts working at Goupil’s, an art dealership in London, for its manager Charles Obach. Lodges in the suburbs (address unknown)

Late August 1873 – Van Gogh moves to new lodgings at the house of Ursula Loyer, a widow, and her daughter Eugenie. They run a small school at their home in Brixton. He made a sketch of No 87 (above) as a present for Eugenie. You can see the original sketch in Amsterdam’s Van Gogh Museum.

“I now have a room, as I’ve long been wishing, without sloping beams and without blue wallpaper with a green border. It’s a very diverting household where I am now, in which they run a school for little boys.”

At the beginning of January 1874, he wrote to Theo:

“Things are going well for me here, I have a wonderful home and it’s a great pleasure for me to observe London and the English way of life and the English themselves, and I also have nature and art and poetry, and if that isn’t enough, what is?”

Early August 1874 – Declares his love for Eugenie and faces rejection

Mid August 1874 – Van Gogh moves to new lodgings in Kennington at the house of John Parker, a publican, Ivy Cottage, 395 Kennington New Road – “a house quite covered in ivy”; it has since been replaced by an office block, and the road has lost its “New”.158 Twickenham Road, Isleworth