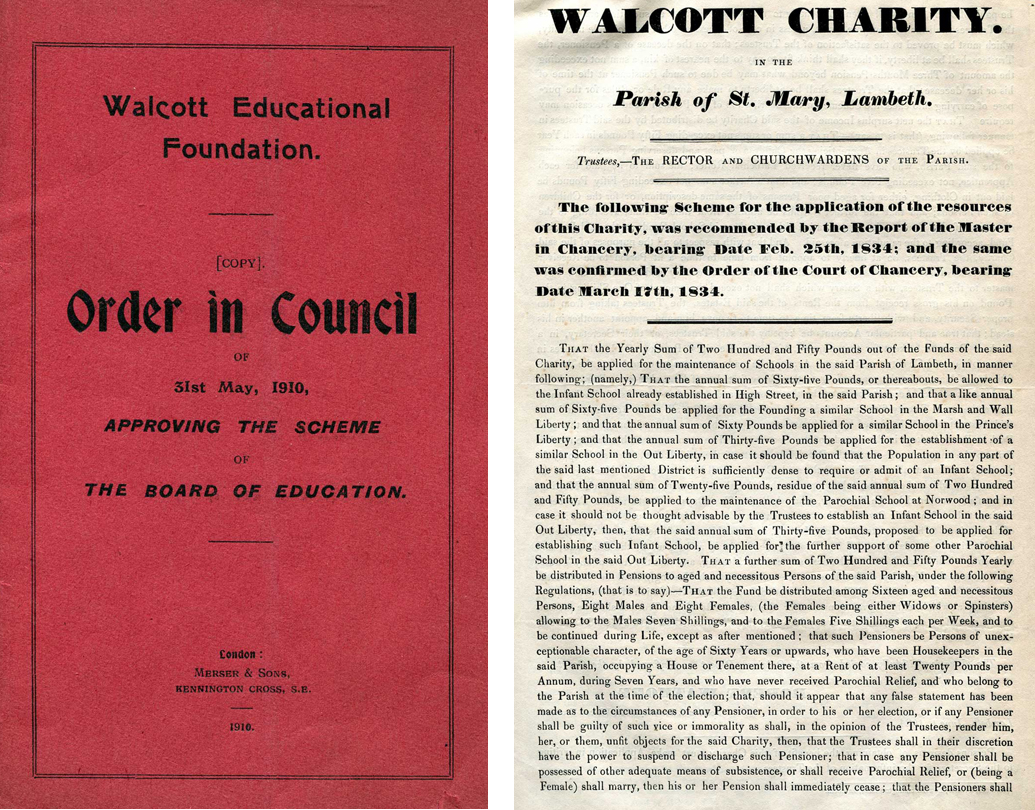 The Walcot Foundation gives away an average of £1.8 million a year ‘for the relief of the Lambeth poor’. The charity has been around for 350 years, established by the 1667 will of a wealthy haberdasher, Edmund Walcott (his surname originally had two ‘t’s), who endowed it with 17 acres of what was then market-garden land in Kennington.

In the years that followed, London expanded over the Thames as one bridge after another was built, Westminster in 1750, Vauxhall (1816), Waterloo (1817) and, in 1862, Lambeth. The market gardens of Kennington lay nearby and soon rental income grew as houses and business premises began to sprout on Walcot land instead of spuds and turnips.

In the 1840s the charity laid out ‘Walcot Square’ and some surrounding streets. It’s actually a triangle, as is the neighbouring St. Mary’s Square.

Today’s Foundation comprises four charities, some of which have absorbed numerous other small Lambeth charities that were too small to be effective. For many years these were known as the ‘Lambeth Endowed Charities’ until becoming commonly known as the Walcot Foundation in 2007.

A Vauxhall property that came into the Walcot fold is the seven-unit Sir Noel Caron’s Almshouse in Fentiman Road, now leased to a housing association. Indeed the building of these – begun in 1618 – provides the Foundation with its earliest recorded date.

For many years what is now the Walcot Foundation was administered from and by the church of St Mary-at-Lambeth in Lambeth Palace Road. Church and charity long ago went their separate ways. St Mary’s is now The Garden Museum, while The Walcot Foundation became independent and professionally-managed and now operates from one of its own Kennington Road properties. Appropriately enough, this backs onto Walcot Square.

In recent years, the Walcot’s average income is around £2.3 million. Half comes from share dividends and half from rents.
In living memory, the built-over former market-garden district of Kennington was distinctly downmarket. It’s now distinctly ‘up’ with Kennington addresses in great demand. This has helped the Foundation grow its income, and to increase the reach of its work in helping Lambeth people from low income households gain the skills needed to get and keep decently paid work.

“2017 gives us the chance to draw attention to the gift Mr Walcot made in 1667 to the people of Lambeth. I doubt he could have had any idea that 350 years later it would still be at work, or worth so much. Perhaps he might have been surprised that poverty still exists.

There are many other endowed charities like ours, often covering much larger areas. What makes Walcot different is its size in relation to the area it covers. Lambeth is a small area, and so our grantmaking can have an impact.

We exist only for Lambeth people from poor households, and most of our grants target those under 30 years of age. We believe that decently paid employment is the best way out of generational disadvantage and so all our grants fund things likely to improve the chances of gaining work over a lifetime. We start early – funding work with pre-school children and go on to fund work throughout the school years and into early adulthood.

Child poverty continues to blight lives. In Lambeth, recent figures show that after housing costs are factored in, the rates of child poverty are excess of 40 per cent in 8 of the borough’s Wards. Severe cuts in public spending are making the situation worse for the poorest.

We view our grantees as partners, not a recipients of charity. We aim to build on the strengths they already have. Our approach is to offer a hand-up, not a hand out.

We don’t want to waste anyone’s time, so our website sets out exactly what we do and what we are likely to fund. Our real interest is will this grant improve the lifetime opportunities of a Lambeth person from a disadvantaged background?”