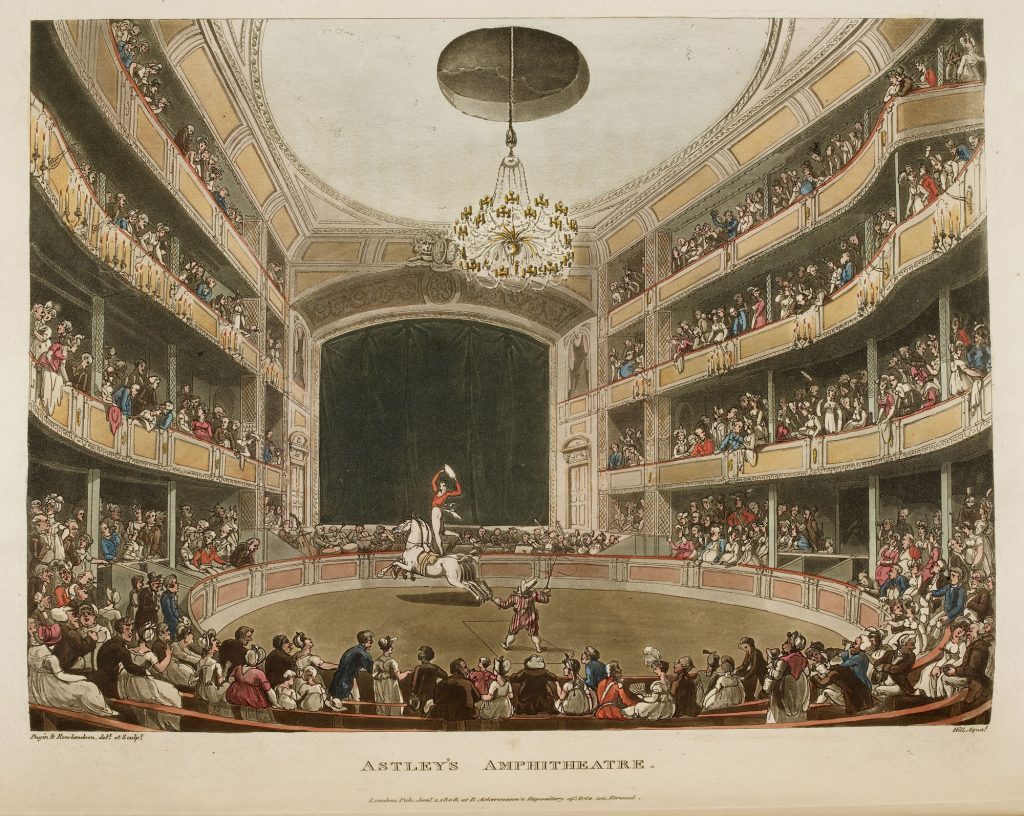 While the Romans had circles or circuses as venues for entertainments of all sorts, there is no direct link to the modern circus,. Following the collapse of the Roman Empire small fairs had travelled from town to town with the odd attraction – a juggler or acrobat. But no one had brought together all the various acts we associate with the circus today.

When cavalry Sergeant-Major Philip Astley, of the 15th Light Dragoons, first left the army he became a trick horse rider performing at various pleasure gardens including Vauxhall and Ranelegh. Rather than working for others, in 1768, he decided set up his own riding school in Lambeth near Westminster Bridge. He taught in the morning and performed his horse riding tricks in the afternoons and evenings in a ‘ring’. He chose the ring shape as riding in tight circles created centrifugal forces that helped with stunts where he stood on the horse’s back. Initially the ring had a diameter of 64 feet but this was reduced to 42 feet, which has become the international standard for circuses today. Astley soon found that riding tricks were not enough to bring in customers, so he added extra attractions such as a clown (Mr Merryman), acrobats, tightrope walkers and jugglers. These performers found that the circus ring suited their acts and that audience appreciation was greater in the round than in traditional theatres.

Astley fenced in his circus ring, and added seating and some roofing and quickly learned the art of advertising his Amphitheatre Riding Ring. In 1782 a former employee called Charles Hughes set up a rival establishment a short distance down the road, which he called the Royal Circus – so the modern circus was born. Starting with a visit to Paris in 1772, Astley took his riding school abroad, which led to the setting up of circuses in many European cities. One of the major risks to circus owners was fire and Astley’s was burnt down three times in its 62-year life.