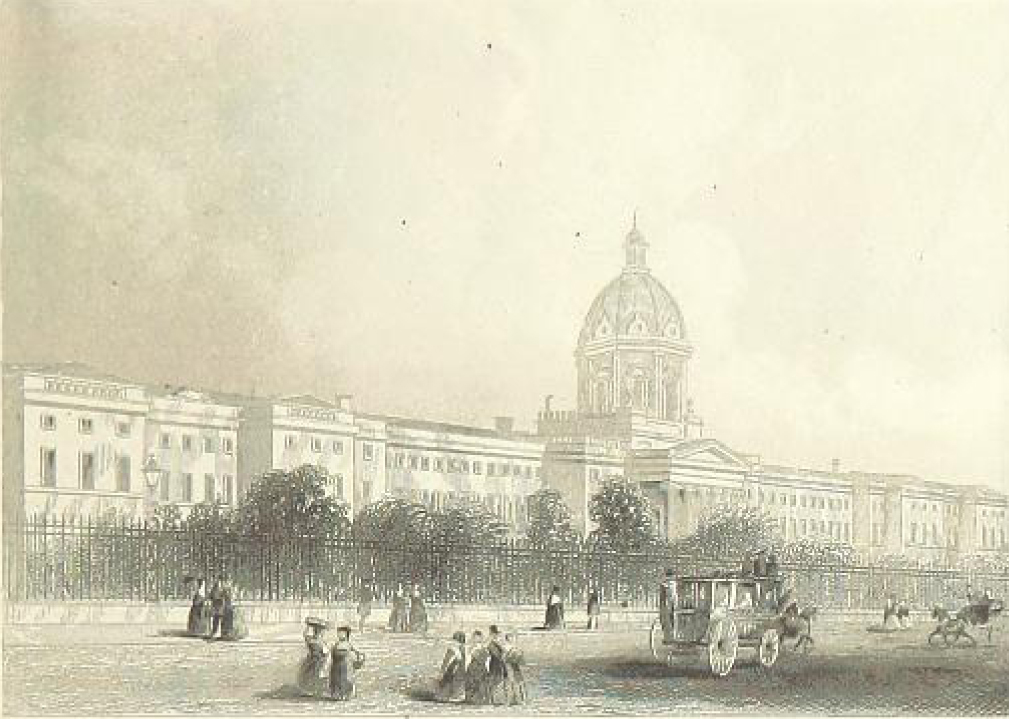 Bethlehem Hospital, from Illustrated London, or, a series of views in the British metropolis, 1846

The Bethlehem Royal Hospital was founded in 1247 by Sheriff Simon Fitz Mary as the Priory of St Mary Bethlehem outside Bishopsgate. In 1377 ‘distracted’ patients were being treated (i.e. chained to the wall and ducked in water or whipped). In 1547 the hospital was fully functioning as a lunatic asylum. In 1675-6 it was moved to a building in Moorfields. By 1800 this building had become unsafe and the hospital moved to a new building in St George’s Fields, housing 122 patients, in 1815.

The building was quickly extended to house the criminally insane. It was further extended in 1835 by a dome and portico to the central block, and a new block to the rear, by Sydney Smirke. The first resident medical officer was only appointed in 1851. In 1864 Broadmoor took over responsibility for the criminal patients. A new hospital was built at Addington and the patients moved out in 1930. The present Bethlem Royal Hospital is at Beckingham. 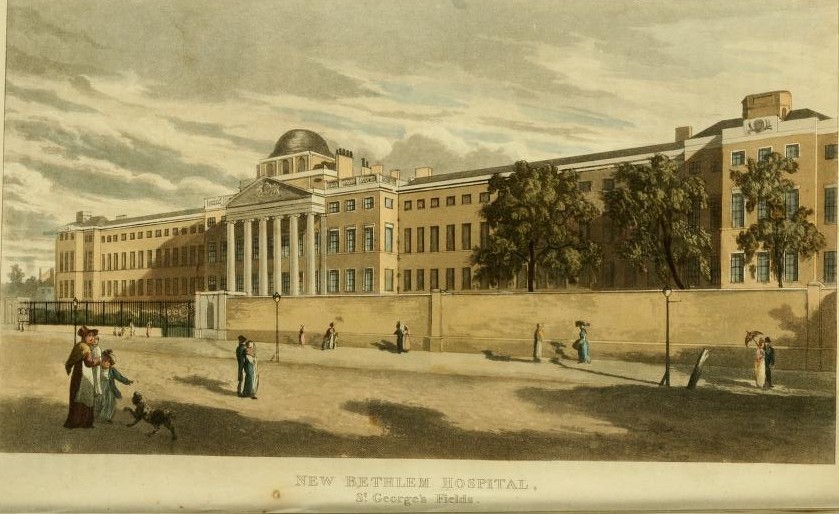 The grounds of the old hospital were bought by Lord Rothermere who donated them to the London County Council for use as a park. The wings of the building were demolished and the central block became the Imperial War Museum in 1936.

Read more in Catharine Arnold’s Bedlam: London and Its Mad

Bell’s Weekly Messenger
(No.1779, Sunday, May 2, 1830.)
Extraordinary Circumstance
A very considerable degree of excitement took place in East-street, Lambeth, on Thursday, in consequence of a man and woman having brought a hackney-coach to conduct away by force a poor elderly woman, whom they said was insane. The neighbours, however, would not permit such an outrage being committed, they all asserting that the poor woman was not insane, neither had she ever committed any act of insanity to their knowledge, and which opinion was confirmed by one of the parish collectors who was present during the latter part of the scene, and who had known the woman many years. The parties at last were obliged to retire without effecting their purpose. It turned out that the poor woman has some trifling property, and that her hopeful nephew, who brought the coach, wanted to confine her in a mad-house, in order to get possession probably of the management of it.