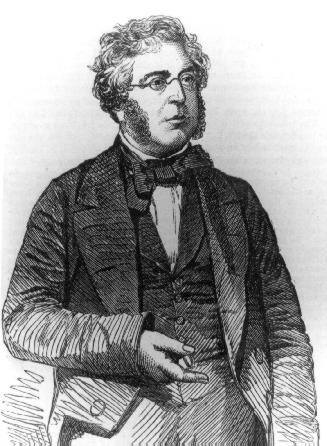 George Parker Bidder (1806-1878) was was an English engineer and calculating prodigy, who resided for a time in South Lambeth Road.

Bidder was born at Mortonhampstead in Devon in 1806, the son of a stonemason. An older brother taught him to count when he was about 5 and he learned to multiply by himself by arranging and counting lead pellets in rectangular arrays. While still a young child, he accompanied his father to local fairs and then around the country showing off his mathematical skills where he earned a good living. (For example, he was asked to calculate the square root of 119,550,669,121 and gave the correct answer 345,761 in half a minute).

Between about 1813 to 1815 he appeared as “the Calculating Prodigy” at Brighton, Cheltenham, Tewkesbury, Dudley, Worcester, Birmingham, Oxford, Cambridge, Norwich, Great Yarmouth and London, earning a national reputation as ‘The Calculating Boy’. While touring, he came to the attention of several people including John and Sir William Herschel who paid for him to attended Wilson’s Grammar School, Camberwell in 1816 but his father removed him after a few months to continue the ‘freak’ shows. In 1819 he came to the attention of Sir Henry Jardine and was tutored privately. By 1820 he was attending Edinburgh University paid for by a subscription raised among members of the Royal Society and others for his further education. In 1824 he became a trainee in the Ordnance Survey but in 1825 left to become an assistant to H. R. Palmer, the Engineer of the London Dock Company. This was the start of a varied and successful career as a civil engineer. He was a friend of Robert Stephenson, who he met at Edinburgh University, and made great contributions to the planning and construction of the railways including the London & Birmingham Railway. From 1832 to 1834 he was resident engineer on Brunswick Wharf, East India Dock.

In 1834 he met Georgina Harbeyand, married her in 1835 and, in 1837, moved to Lower Cottage, South Lambeth Road (site unknown). He made trips to Norway and Switzerland to plan and construct railways.

In 1845-6 he formed the Electric Telegraph Company and worked on the development of transatlantic cables. He is said to have been responsible for employing women as telegraph operators, and in 1869, when the Post Office took over the telegraph service, these women became the first female Civil Servants! The Home Civil Service long led in providing equal opportunities for both sexes, for which Bidder must take some of the credit.

He helped with the introduction of gas lighting to Denmark in the 1850s, and acted as consultant engineer to various Indian railways. He was also consulted on the main drainage of London and he proposed, designed and built Victoria Docks, which opened in 1855.

Bidder’s self-developed, self-taught methods of mathematics are against conventional methods and are too difficult to explain here but were very quick and seem to have been based on the idea of an arithmetical progression, and a method of summation.