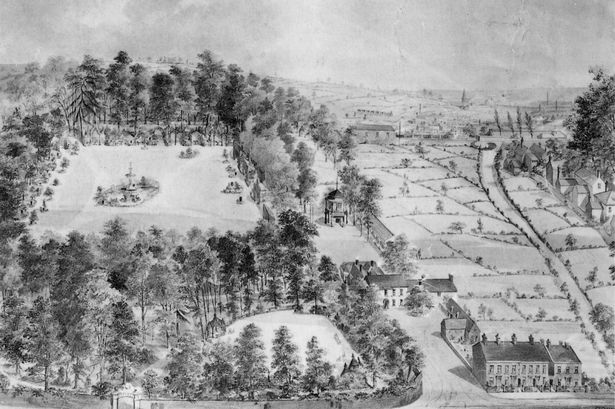 Vauxhall Gardens lay in an area which, at that time, was just outside Birmingham, called Duddeston. Dudda’ s tun means Dudda’s homestead but it is not known who Dudda was. In 963AD a charter was granted to one Wulfget the Thane by Eadgar, King of the Angles, Nothing is known during the next 200 years.

The family seat of the prominent and wealthy Holte family was at Duddeston Hall. The name Holte is also Saxon and the family probably lived in the area before the Conquest, but the earliest record is of Henry in the 13th century. He must have been a wealthy man as his son Hugh married Maud, daughter of Sir Henry de Erdington. Maud is known to have been living in the area in 1327 with her son John and his son Simon. Simon purchased the manor of Nechells. Simon’s grandson John purchased the manor of Duddeston from his maternal grandfather in 1365. Two years later his mother bestowed on John, by charter, ‘the fair manor of Aston’ and so by 1400 the family owned at least 500 acres of land in Duddeston and Nechells as well as the area of Aston and they lived in a manor house in Duddeston. Five generations later Thomas Holte was appointed Chief Justice of Wales and also commissioner for the dissolution of religious Houses by Henry VIII. Thomas died in 1546 and an inventory of his possessions at Duddeston manor house gives an indication of his wealth. The manor house stood on the left bank of the river Rea (pronounced ray). Thomas’s grandson, also Thomas, was knighted in 1603 by James I. Thomas was given a baronetcy for supplying the King with a small army for the defence of Ireland, “especially for the security of the province of Ulster” . Thomas later built Aston Hall (it still stands opposite Aston Villa football ground) but the family still used Duddeston Manor. It is known that Thomas’s grandson’s widow Ann was living there in 1725 and presumably lived there until her death in 1738.

In 1746 an advertisement appeared in Aris’s Gazette for a cock fight at Duddeston Hall. These adverts appeared regularly and the name Vauxhall appeared gradually. There is no record of the old manor house being demolished and in 1758 an advert appeared: “Duddeston Hall, commonly called Vauxhall, near Birmingham in Warwickshire, is now fitted up in a neat and commodious manner for the reception of travellers….. ” It was quite common in the Georgian period for mediaeval houses to be built around, and it would appear that this is what happened to Duddeston Manor. Advertisements for various functions continued to appear in Aris’s Gazette. In 1751 the following appeared: “To be lett and entered upon immediately, Duddeston Hall commonly called Vaux Hall, near Birmingham, in the county of Warwickshire being a large and commodious house, with necessary out buildings, and a large bowling green. It lies within half a mile of Birmingham and greatly resorted to by the inhabitants thereof, as well as from other places, being used in the publick way, and in the summer season is a concert every other week. There is a closed cock-pit. The place is well known to most travellers. ” An old book of 1766 refers “near Birmingham there is a seat belonging to Sir Lister Holte, Bart, but now let out for a public house where there are gardens etc. with an organ and other music, in imitation of Vauxhall, by which name it goes in the neighbourhood “.

There are many references to events at the gardens, with fireworks and military bands. Well-known singers appeared there and balloon flights also took place. One man used to throw his dog over the side wearing a parachute! By 1837 Drake’s ‘Picture of Birmingham’ says “Vauxhall. At the extreme east of the town, stand the house and grounds bearing the above appellation – once a favourite resort but now deserted as unfashionable … There is an air of elderly respectability about the place. Etc ”

On 16th September 1850 a farewell dinner was held to mark the closing of the Gardens followed by a Ball. When the Ball ended at 6am the next morning, the first blow of the axe was stuck to the trees. It seems to me a great pity that the gardens were not kept as a park among the rows of houses that were built soon afterwards. The Holte family baronetcy died out as there were no male heirs. The estate passed to the daughter of the last baronet, Sir Charles. Her husband used the estates as security but his business failed and the estates were sold to pay his debts.

In 1783 Duddeston could boast about 80 homes, and the area was being rapidly built up. Following the 1791 Birmingham Riot, when the military had to travel from Lichfield, military barracks were erected near the Vauxhall Gardens. They consisting of handsome buildings, a cavalry exercise area, parade grounds and a hospital. By 1795 a further 311 homes had been built. Soon urban sprawl from neighbouring districts linked up with the Duddeston/Vauxhall area.

The first railway to Birmingham was the Grand Junction Railway. Its Birmingham terminus was to be Curzon Street but a viaduct was still under construction so the company built a temporary terminus at Vauxhall. On 9 July 1837 an experimental train of six coaches and 36 passengers made the journey from Liverpool to Birmingham Vauxhall. So Birmingham Vauxhall had a railway station a year earlier than London Vauxhall (The Nine Elms terminus of the London and Southampton Railway was opened in 1838). The Birmingham station is still standing today 165 years later.

In 1932 the barracks, which covered five and a half acres, were pulled down by Birmingham Corporation to provide 180 maisonettes which are still there. The area suffered from a lot of bomb damage during World War 2 due to its proximity to large railway sidings, gas works and factories. The area was rebuilt again in the 1960s and a school was built on the opposite side of the road to the site of the gardens. The school was named Vauxhall Gardens but later closed due to falling numbers.

With grateful thanks to Val Preece for writing this article.