The Vauxhall Society is grateful to Paul Atterbury for permission to publish his account of the the rescue and subsequent restoration of the Gilbert Bayes ceramic frieze  ‘Pottery Through the Ages’ as well as his contemporaneous notes on the chronology.

This Gilbert Bayes masterpiece was snatched from Doulton House on the Albert Embankment as it was being demolished in the winter of 1978/9.

The images are from Gilbert Bayes and the Doulton House Frieze, a Royal Doulton brochure produced for the installation of the restored frieze at the V&A in 1988. 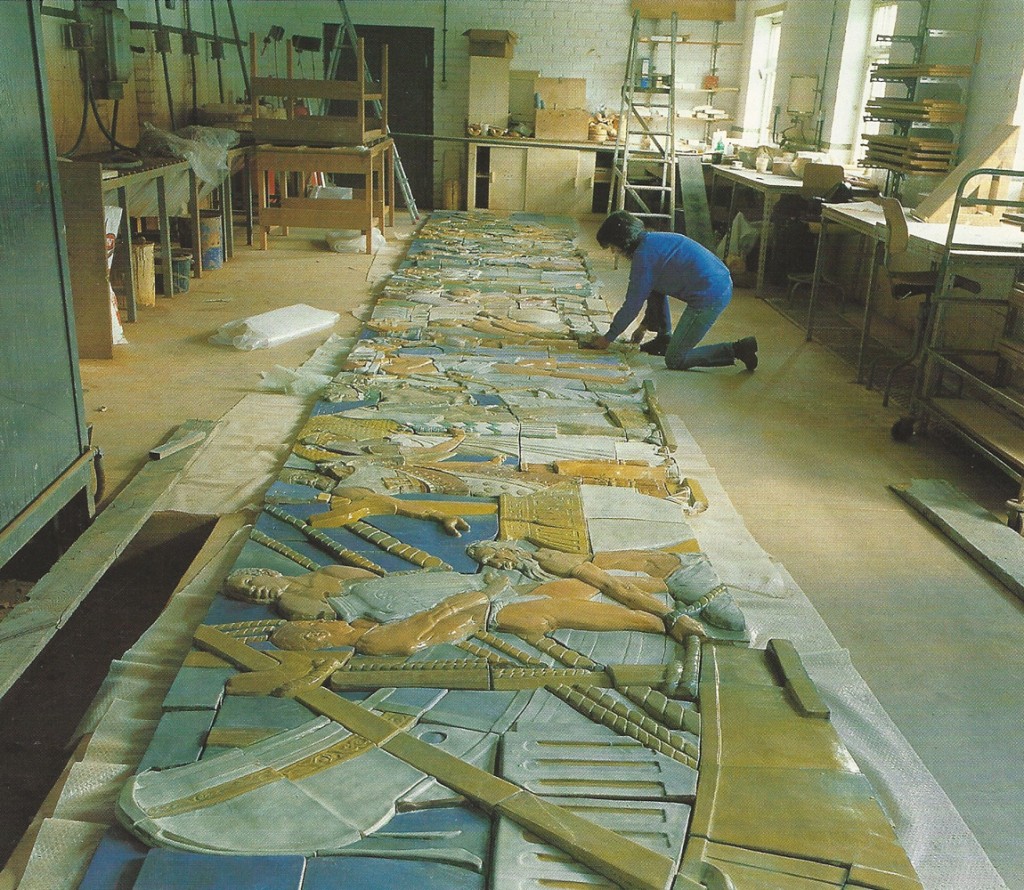 This large ceramic frieze, depicting Pottery Through the Ages, was designed and modelled by the sculptor Gilbert Bayes for the facade of Doulton House in Lambeth. In the late 1930s Royal Doulton, a manufacturer of ceramics associated with Lambeth since 1815, decided to build a new headquarters on the Albert Embankment. The architect was T. P. Bennett and the building, facing Lambeth Bridge and the Thames, was completed in 1939. With its modernist façade of cream, black and gold ceramic panels and with Bayes’ 50 foot frieze in polychrome stoneware above the entrance, the building soon became a familiar landmark, and established a reputation as one of London’s few good examples of Art Deco architecture.

The manufacture of ceramics ceased at Lambeth in 1956 and in 1968 Royal Doulton moved their headquarters to Stoke-on-Trent. Doulton House was sold, and it then remained empty until 1978 when the decision was made to demolish it. At this time, public interest in interwar architecture was relatively muted, and so little attempt was made to save the building. However, when demolition started in the autumn, Doulton received a spate of telephone calls from members of the public concerned about the imminent destruction of the Bayes frieze, and so, when all attempts through normal channels had failed, they discretely supported the unofficial action that resulted in the last minute rescue of the frieze from the claws of the bulldozers. The rescue was carried out by volunteers from Ironbridge Gorge Museum who worked through December and January to recover the several hundred irregular blocks of stoneware that made up Bayes’ ceramic jigsaw. The frieze was then taken to Ironbridge for storage and eventual restoration once a suitable site had been found.

After some years of uncertainty, the future of the frieze was finally assured by the Victoria & Albert Museum’s decision to give it a permanent home. Full restoration was carried out at Ironbridge under the aegis of the Manpower Services Commission and the frieze was installed in its present location during the spring of 1988. Aware of the continuing public interest in the frieze and conscious of its historical significance, Royal Doulton have funded its rescue, restoration and re-erection. 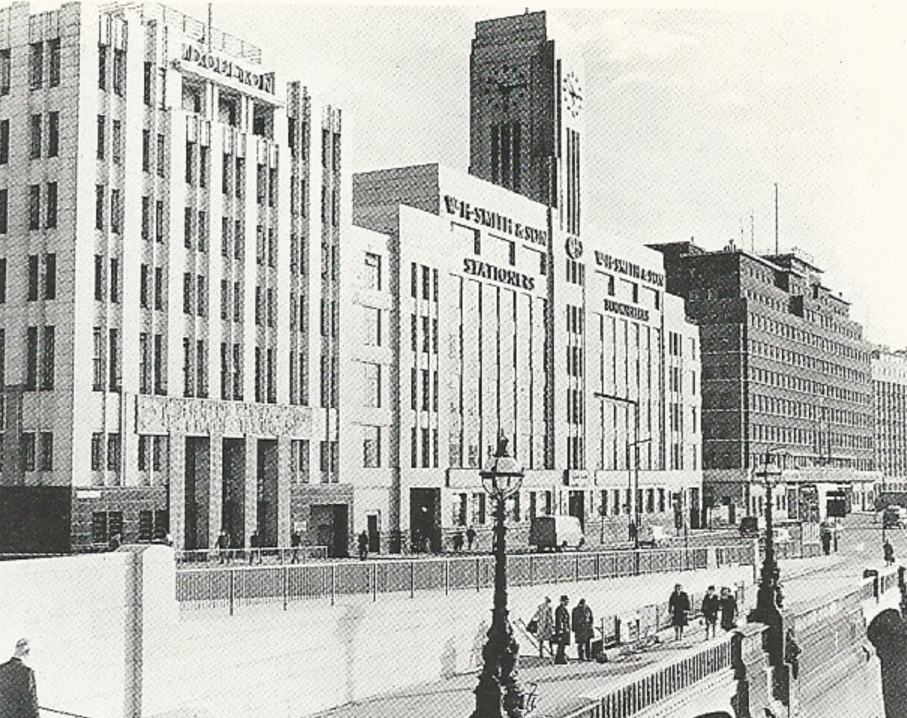 Doulton House, Albert Embankment, is on the left – you can see the frieze above the main entrance. The adjacent W. H. Smith building was also faced with Doulton tiles.

Gilbert Bayes was associated with Royal Doulton from 1924 until the Second World War, and made extensive use of Doulton’s coloured stoneware for both public and small-scale sculpture. The Doulton House frieze is certainly his masterpiece, but other work by Bayes in Doulton’s polychrome stoneware can be seen decorating the White Rock Pavilion in Hastings, built in 1927 and several apartment blocks built for the St Pancras Housing Association in 1938. However, Bayes is probably best known for his work in other materials.

Born in 1872, Gilbert Bayes was a sculptor whose work spanned the Arts and Crafts Movement, Art Nouveau, Art Deco and Modernism. He first exhibited at the Royal Academy in 1889, and then continued to work up to his death in 1953. Widely respected during his lifetime and President of the Royal Society of British Sculptors for many years, he was well known for his enthusiasm for public sculpture and for a close association between sculpture and architecture. As a result, work by Bayes can be seen in many parts of Britain, in France, Switzerland and Australia but he was above all a London sculptor. Major works by him to be seen in London include the Queen of Time clock above the main entrance to Selfridges in Oxford Street, the frieze on the Saville Theatre (now a cinema), in Shaftesbury Avenue and the large panel outside Lord’s Cricket Ground. Other examples of his work are at the BBC, the Victoria & Albert Museum, Merchant Taylors’ Hall, the headquarters of the London Fire Brigade and the Law Society. In addition, Bayes carried out many commissions for private clients, in wood, ivory, bronze, stone and concrete, as well as in ceramic. 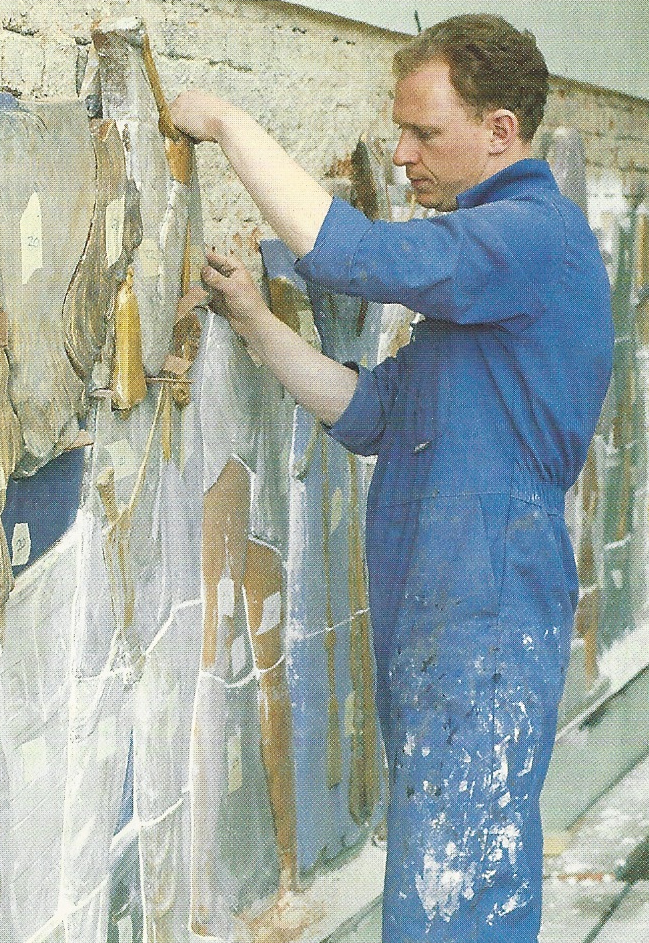 After restoration, Bayes’ frieze is reassembled at the Victoria & Albert museum

By far the greatest Art Deco sculptor in Britain, Bayes developed a characteristic style that is now highly evocative of its period. He was also responsible for more public sculpture between the wars than any other artist working in Britain, and so it is entirely fitting that his greatest, and most decorative, work should be on permanent display at the Victoria & Albert Museum.

View the frieze in place at the V&A

What follows here are Paul Atterbury’s notes made at the time, as well as the Royal Doulton publicity material (also provided by Paul) for the 1988 unveiling at the V&A of ‘The History of Pottery’.

The dramatic rescue of Vauxhall’s Gilbert Bayes Frieze from the demolition of Doulton House ..as it happens

Large ceramic panel depicting Pottery Through the Ages commissioned by Royal Doulton from Gilbert Bayes, a sculptor associated with Doulton for over 10 years. Panel modelled full size in plaster by Bayes, then made in polychrome stoneware blocks at Doulton’s Lambeth factory under Bayes’ direction. Colours determined by Bayes.

Panel installed on facade of the new Doulton House on Albert Embankment, facing Lambeth Bridge. 50ft long, the panel was planned as an architectural unit with the building, and was set above the main entrance, carried on gold and black pilasters. Whole building faced with cream stoneware ceramic tiles, the end result making it one of London’s best Art Deco buildings.

Building ceases to be Doulton’s HQ, following sale of company by the Doulton family. The building is vacated and sold and then remains empty for several years.

After years of disuse, the building is sold again and a decision is made to demolish it. No attempt made to list or preserve the building. Demolition starts in late 1978.

Doulton’s attention is drawn to the imminent loss of Bayes’ panel by many phone calls from the public, but Doulton is powerless as they had sold the building years before. As Historical Advisor for Royal Doulton at that time, Paul Atterbury decides to try to do something. Approaches are made to the Greater London Council (GLC), Historic Buildings Division, Lambeth Council etc, all to no avail. Interest and regret are expressed but no one is prepared to do anything. Spot listing is out of the question as the building is already being demolished. Atterbury persuades Doulton that the panel should be saved if at all possible, and the Chairman of Doulton & Co (the London-based holding company for Royal Doulton at that time) agrees to give Atterbury a sum of money and carte blanche to do what he can within the law to save it.

Paul Atterbury goes to Ironbridge Gorge Museum, where there is a team specialising in rescuing and conserving tile panels. They are keen but nothing on this scale has ever been attempted before and the technology does not exist. Discussion of various methods of cutting out the panel, but all too expensive and uncertain, so the decision is made to break into the site at night and try to cut panel out with portable equipment on a trial and error basis. There is nothing to lose.

Paul Atterbury waits until demolition has reached level of panel, then alerts Ironbridge team who arrive at the site at 11pm on a cold night, fully equipped with generator, Kango drills etc. Entry effected via the scaffolding in front of the building, and work starts on removal of small panel on the side of the building to see if it could be done. Deal was that if panels could be removed, Ironbridge could have a small one for their tile museum, as part payment for their efforts.

Within a few hours the first blocks is cut out, and so rescue was practical. Team works through the night, and is discovered in place by demolition contractors next morning. PSA, architects etc called in. Predictable angry scenes, much shouting and threats, but team refuses to move from scaffolding and work continues. Mid-morning Paul Atterbury and Tim Evett, leader of Ironbridge team, agree to come down to negotiate. Rather hairy meeting with PSA and others, adamant refusal to give way or to vacate site until the panel is safe. Eventually PSA give in, giving three weeks for removal of panel on condition Ironbridge team supply all own equipment, including power. So work continues. No media attention and no police involvement. Demolition contractors become very sympathetic and helpful, important as technically the owner of the panel. PSA always unfriendly and difficult.

Main panel comes off very slowly, each block having to be cut out with inadequate equipment and with as little damage as possible. Each block has to be carried by hand down a ladder, there being neither money nor power for a crane. It then snowed and was very cold, but work carries on over Christmas and the last block is cut free in January 1979. All blocks then transported to Ironbridge, who have agreed to restore the panel.

Panel languishes in a shed at Ironbridge, while attempts made to find a suitable site for re-erection. Doulton, now the owners of the panel, having funded the rescue, prefer a London site. GLC now become interested, and various situations suggested, all considered unsuitable. Finally, new location agreed in Vauxhall Cross development, but plan thwarted by collapse of contractor involved. Attempt to have panel attached to new library in Telford New Town, but this resisted by Doulton. By 1985 both Paul Atterbury and John Tustin, the Doulton/Pearson person involved from the start, in despair, and Ironbridge needing the space taken up by the blocks. Atterbury and Tustin agree that it will soon be two tons of coloured hardcore unless a home can be found quickly. Approach made to V&A and John Mallet of Ceramics Department goes to Ironbridge to have a look. To his eternal credit, he looks at the pile of rubble in a gloomy, wet shed and agrees to take it.

Panel fully restored block by block by Manpower Services Commission team at Ironbridge, who first saw off all the rubbled attached to each block, making them into large tiles or panels about 2in thick. The conservation and recolouring follows. Meanwhile, discussions at V&A to decide location, and Pearson in the name of Doulton agree to fund installation costs. Regular progress visits by Paul Atterbury to Ironbridge, who is now not only the only person to know the whole story but also determined to see panel on display, in his lifetime. By September 1987 restoration completed and all blocks carefully numbered at Ironbridge and packed for transport to V&A store at Blythe Road. Meanwhile, location at V&A decided, and suitable contractors for erection sought.

The installation of the panel begins at the V&A.

Apart from Paul Atterbury and John Tustin, credits due to:

Previous Post: « ‘Representations of the Child, displayed at Vauxhall Gardens and the Foundling Hospital’
Next Post: Vauxhall’s other pleasure gardens and a ‘Vauxhall Cross Plan’ of yesterday »