With grateful thanks to Murder-UK.com for permission to use their text and image. 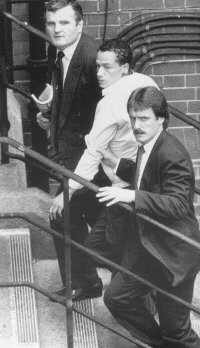 Erskine was a sexual psychopath who preyed on the elderly and became known as the Stockwell Strangler. On 7 April 1987 the body of 78-year-old retired schoolteacher, Miss Eileen Emms, was found in her home. In June there were three more murders, 67-year-old Mrs Janet Cockett, 84-year-old Valentine Gleim and 94-year-old Zbigniew Stabrawa.

In July three more elderly people were strangled in their homes. These were 82-year-old William Carmen, 74-year-old William Downes and 80-year-old Mrs Florence Tisdall. In none of the cases had there been a struggle and they were no signs of any forced entry. It looked as though their attacker had got in through unsecured windows. In some of the cases the victims had been robbed.

In the early hours of 27 June 73-year-old Frederick Prentice was awoken by sounds of someone entering his bedroom. He switched on the light and told the intruder to get out. He was attacked by the intruder but while being strangled freed one hand and pressed the alarm at the side of his bed. His assailant ran off.

A pathologist involved in the case reported that, from the pattern of injuries, it looked as though all the killings were linked. It appeared that the killer had knelt on the victim’s chests, had placed his left hand over the mouth and had used the right hand to throttle the victims. In four of the seven cases the victim had been sodomised after death. Forensic scientists discovered a single hair at the scene of Emms’ killing and found shoe marks that matched at three of the scenes.

At the scene of the Cockett murder fingerprints were found on a displaced plantpot and there was a palm print on the wall of the Downes’ kitchen. The prints were found to belong to Kenneth Erskine who had a criminal record for burglary. But Erskine’s whereabouts were not known. It was discovered that he was collecting Social Security payments and a watch was kept at the office where he signed on. When he appeared he was duly arrested.

At an identity parade Erskine was recognised instantly by Frederick Prentice. Examination of Erskine’s building society accounts showed that during the three months of the murders he had paid in around £3,000, including £300 the morning after the Carmen murder. The old man was known to have kept about £400 in cash in his bedroom.

A hairdresser told police that she had been approached by Erskine who had requested that she bleach his head and pubic hair. She had agreed to the former but had refused the latter request. She said that while he was sitting waiting for the bleach to take effect he had taken the bowl with the bleach and had applied it to his pubic region. He had also tried to bleach his eyebrows and had got some of the chemical into his eyes and needed help in washing it out. DNA fingerprinting with swabs taken from the Downes murder indicated that Erskine could have been responsible but they could not prove it conclusively.

His trial opened at the Old Bailey on 12 January 1988. Erskine faced seven counts of murder and one of attempted murder. He pleaded not guilty but the jury did not believe him and he was found guilty on all eight counts. Erskine was given seven life sentences for the murders and twelve years’ imprisonment for the attempted murder. The judge recommended that he should serve a minimum of 40 years, the longest period of detention ever recommended.

In February 1996, Erskine prevented an attack on Peter Sutcliffe, the “Yorkshire Ripper”, by raising the alarm as a fellow inmate, Paul Wilson, attempted to strangle him with the flex from a pair of stereo headphones.

In July 2009 he won an appeal to have his conviction amended to manslaughter due to diminished responsibility (he is judged to have been severely schizophrenic at the time he was murdering pensioners).

The BBC has a story on the detective work that led to Erskine’s arrest.