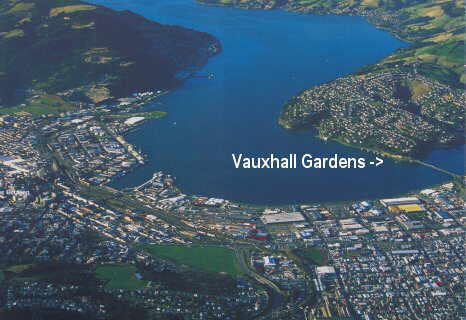 The New Zealand Vauxhall is in Otago Province and is a short distance from the city of Dunedin, which has a population of about 120,000 (so roughly about the size of Exeter in the UK). Today it is a small, upmarket, leafy and sunny suburb built on a moderate slope with a sharper drop to the harbour. Consisting of a few streets: Torr, Danube, Cornwall, much of Glendevon Place, a little of Glenyle St and some of Portobello Road, plus a waterfront road below. Most of the area roughly faces north and is better sheltered from the wind than the larger neighbouring suburb of Waverley with which Vauxhall is often associated. Leafy, public zig-zag walkways lead up from the waterfront road, with its private boatsheds and the Vauxhall Yacht Club building, to the quiet, posh Vauxhall above.

In the area between Torr Street and Danube Street is the site of Dunedin’s former Vauxhall Gardens. Although parts of the site were originally known by the Scottish name Graigleith, it was renamed Vauxhall Gardens by Henry Farley who in late 1862 bought the site for the huge sum of £10,000 to build gardens and provide amusements for the newly rich miners of the Orago Gold Rush.

Farley quickly engaged a number of men to lay out and drain the site. The Vauxhall Pleasure and Tea Gardens opened on 23rd December 1862. The main attraction was an open-sided Rotunda that was 45m in circumference. The Rotunda held an orchestra pit and a dance floor. The next significant building was a hotel which when opened only had one room. “In this immense chamber a long counter is erected, behind which appears a goodly array of choice liquids, presided over and dealt out by a fair goddess.” Soon the Hotel was extended to incorporate a 13.7×7.6m Ladies Refreshments Room, a 5.5×4.6m Private Sitting Room and the manager’s residence. In wet weather the Hotel’s main room would be used for dancing.

As with its London namesake, the Dunedin Vauxhall Gardens soon had a reputation for heavy drinking and prostitution. Business boomed and this 20-plus acre site could soon boast a gymnasium, archery butts, two skittle alleys and a bowling green and private picnic ground. A dozen summer houses were built “which will offer nice retreats to visitors seeking refreshments, or rest.” The 2.4 acre well-stocked rabbit warren with pigeon shooting was also popular.

Farley staged various sporting events and fetes and in 1864 added cages with koala bears, kangaroos, Tasmanian devils, monkeys and various birds. Feeding vultures with raw meat was always a highlight of each day and at night firework displays lit up the sky. The first balloon in Otago was launched from the Gardens.

All these amusements were set in a backdrop of the cliff face with native bush, imported trees, strawberry gardens and other flora. For access, Farley had steps and paths cut into the side of the cliff and even built a cable-operated funicular railway up from the jetty on the waterfront. The steamer Nugget was especially built for the Dunedin-Vauxhall service.

In 1864 a £2,000 salt-water baths was opened next to the jetty. The baths had a men’s pool, hot bath rooms and a cold shower bath as well as about fifty men’s bathing and dressing rooms. The ladies had their own pool, dressing rooms and ladies’ waiting and refreshments rooms. Above the baths there was a bar refreshment saloon and a 400-plus seater grandstand.

In 1865 the number of visitors started to decline and in 1866 Farley sold it to John Grey, Charles Grey and Charles Armstrong. After just one season they sold it to Abraham Rees and William Woodlands but by 1868 Rees was bankrupt, The gardens were then only opened on a few select days each year. But by 1871 the height of the gold rush was over, the Gardens’ novelty had gone so they were closed. The land was divided up and sold in 1872 and 1878. Farley, the scheme’s originator, died in Sydney in 1880. No trace remains of the gardens except for a few marks of the railway in the hillside.

Based on information kindly supplied by Paul Hayward and in his ‘Intriguing Dunedin Street Walks’ 1998. Printed by Express Office Services 300 Princes Street, Dunedin.