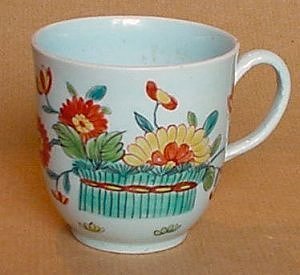 At one time or another English soapstone has been mined in Cornwall, Cumbria, Derbyshire and Somerset. In 1751 a licence to mine soaprock was taken out by Nicholas Crisp of London, a jeweller, and John Sanders of Lambeth, a potter, and by 1752 nearly 30 tons had been used by this licence. The soft paste porcelain was of the soapy type with some added calcium. It is interesting to note that John Bacon (later a R.A.) was employed at the factory and may have been a modeller and decorator of figures. Wares and figures were produced in underglaze blue and polychrome and indeed a polychrome printing technique was used at Vauxhall.

John Sanders died in 1758 leaving Crisp to carry on till 1763 when he became bankrupt. Nicholas Crisp’s unfortunate circumstances were probably not precipitated by the porcelain factory but by other business interests. The stock was finally sold up in 1764. Nicholas Crisp is next found at Bovey Tracey. Following excavations carried on in 1980 and 1987 at the Vauxhall site a group of porcelain previously given to William Ball of Liverpool can now carry the Vauxhall label.

There are no factory marks for Vauxhall.