2016’s Shakespeare quatercentenary (he died on 23 April 1616) calls to mind the magical murals on Shakespearean themes that Eric Ravilious and Edward Bawden painted for the Refreshment Room at Waterloo’s Morley College. Unveiled in 1930 by the Prime Minister of the day, Stanley Baldwin (a kinsman of Edward Burne Jones), the Morley murals were such a sensation that an imperious Queen Mary commanded a private view with the artists in attendance. Her Maj doted on dolls’ houses, and in an unShakespearean moment Ravilious had painted a cutaway of a London boarding house that could just about be taken for the abode of some grown-up dolls.

The link between Morley College and Shakespeare – apart from the site of The Globe being just down the Blackfriars Bridge Road at Bankside – is the social reformer Emma Cons (1838–1912).  Miss Cons’ war on  drunkenness led her in 1880 to buy the notorious Royal Victoria Palace music hall  (‘the Old Vic’), which now became a temperance establishment, the Royal Victoria Hall and Coffee Tavern, although retaining ‘the Old Vic’ nickname. Miss Cons started science classes in some of the Vic’s disused dressing rooms, from which developed the Samuel Morley Memorial College for Working Men and Women, named for the benefactor who put up the cash. When Miss Cons died, management of the theatre passed to her niece, Lilian Baylis, who in 1914 began a long series of Shakespearean productions. There is a plaque honouring these women on the corner wall of the Old Vic at the junction of Waterloo Road and The Cut, but the theatre’s present commercial management painted it over, and Kevin Spacey, artistic director 2003-2015 evidently didn’t notice. The National Theatre began here in 1963, moving to the South Bank in 1976.

Morley College moved from the Old Vic into its own premises in 1912, and in the late 1920s Eric Ravilious and Edward Bawden were commissioned to cheer up the college’s gloomy cafe; it was with the Old Vic’s many Shakespearean productions in mind that the two muralists looked to the Bard for inspiration. On 15 October 1940, however, the magic died and with it the 57 men, women and children who were sheltering in Morley from the Blitz. A bomb hit the Georgian building, which Morley’s Elaine Andrews tells us, ‘folded like a pack of cards’. For a while, Morley had to return to the Old Vic.

Edward Bawden was to return to Morley and the Refectory after the war, and you can look in and see his Canterbury Tales mural there today. And Bawden’s friend Ravilious? He loved aircraft, particularly the dumpy, clunky little Walrus seaplane. In 1942, and now an official war artist, Ravilious was aboard a Walrus that set off on an air-sea rescue mission from an RAF base in Iceland and did not return.

The Refreshment Room in 1924

When Morley moved from the Old Vic to the former Yorkshire Society’s School in Westminster Bridge Road in 1924, a new Refreshment Room, Hall and Gymnasium were built at the rear. Three years later Eva Hubback was appointed as Principal. Soon she had news to report of a major development that would transform the refreshment room, and decorate the back of the stage of the Prince of Wales Hall.

The catalyst for the paintings at Morley was the mural The Expedition in Pursuit of Rare Meats painted by Rex Whistler for the Tate Gallery Restaurant. The idea for a mural painting had come from Sir Joseph Duveen, a British art dealer, one of the most generous patrons of the Tate Gallery. William Rothenstein of the Royal College of Art recommended Edward Bawden and Eric Ravilious for the ‘gloomy’ Refreshment Room, and Charles Mahoney for the Prince of Wales Hall. The artists were to be paid £1 a day and the materials would be paid for by Duveen. The murals were painted straight onto the plaster walls using oil colours mixed with wax, thinned with turpentine. 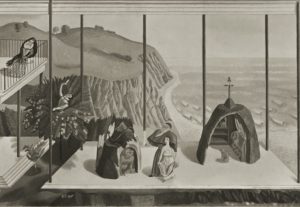 The Tempest with Romeo and Juliet on the left, Edward Bawden

The Refreshment Room presented quite a few challenges – it had one wall of windows, one wall divided up with a door, and another with two doors and a serving hatch. Edward Bawden was lucky and got the one uninterrupted wall, which he devoted to ‘Shakespeare’. Both artists plundered obscure plays including Peele’s Arraignment of Paris, and Ben Jonson’s Cynthia’s Revels for the remaining walls. The skies were peopled with muses, goddesses and figures from Commedia dell’Arte. 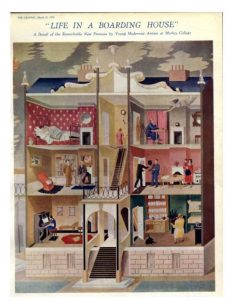 Ravilious created a Boarding House, peopled by some of his friends. The future Mrs Ravilious (Tirzah Garwood) is seen walking up the stairs. Eva Hubback wrote, “The London boarding house is just a joke – as, indeed, are many of the figures flying about in between”. Pamphlets can be obtained at one penny each from the Secretary which explain in further detail what the pictures are all about.[1]Morley Magazine, November 1930, p.20 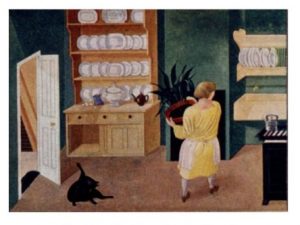 Detail of the kitchen with Beryl Bowker, aspidistra and cat

As Bawden commented 40 years later: “Elizabethan plays, Shakespeare, Olympian gods and goddesses, Punch and Judy, a Miracle play and a doll’s house. Gosh! What a riot it was. The painting proceeded slowly and two years passed before it was completed. Eric was still teaching intermittently at Eastbourne, but he had fallen in love with one of his students. The love affair with Tirzah Garwood blossomed on one of the walls: Tirzah impersonating Venus, fully in the nude, stood proudly on a floating cloud. It was the finest thing he painted.”[2]Catalogue for Eric Ravilious exhibition held at Morley Gallery in 1972 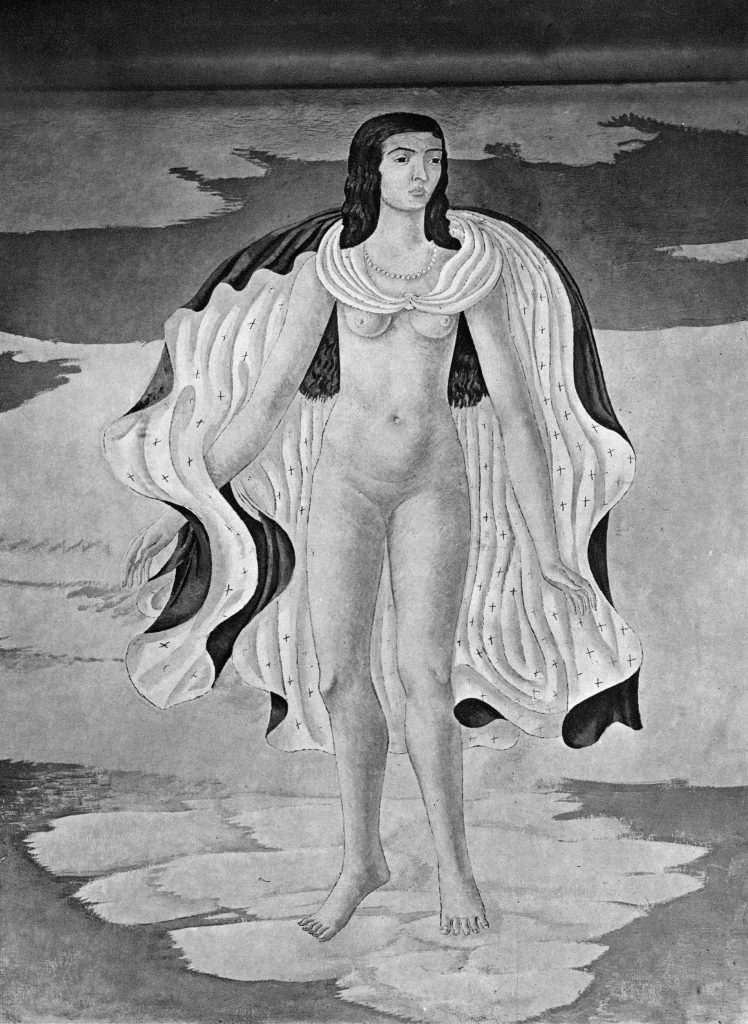 The impact of these paintings on the students was considerable, Ronald Davidson wrote a long article for the Morley Magazine which begins, “MORLEY COLLEGE never stands still. True to its tradition of adventure and experiment, our College has now stepped boldly into the field of pictorial art, and, with the aid of a generous group of friends, has become the proud possessor of something new in the way of wall paintings—nothing revolutionary, but a lively contribution to the tradition of mural decoration. Hitherto, our plain walls have not been conspicuous for their beauty, but now we have colour, and happiness itself, radiating down on us in our two principal gathering places”.[3]Morley Magazine, March 1930, pp.78-80 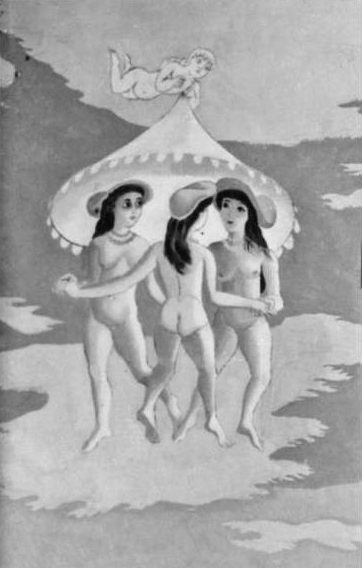 The Three Graces by Edward Bawden

One of the students, Philip Lewer, was a frequent contributor to the Magazine and his admiration for the Refectory murals is obvious. In The Extension of My Dreams, the characters from the Refreshment Room come to life. “Then followed a medley of grotesque figures – Caliban, several of his little brothers and sundry other members of his queer family; a lady with an aspidistra, another with a weather-vane and a third without a bathing-costume, the hussy; Romeo with his Juliet, lugubrious Prospero and a miscellany of Shakespearean characters; a group of apartment-house dwellers; evidently scarcely on speaking terms; the nucleus of a nudist colony garbed chiefly in inadequate cloudlets; a chorus of sprites, angels, nymphs and things; a few animals including a pair of shop-soiled horses, a moth-eaten dog and a black cat; and some curious blokes with harps. I perceived that the refreshment-room mural-decorations had come startlingly to life”.[4]Morley Magazine, March 1937, p.28 Here is that ‘nudist colony’.

Even Samuel Pepys apparently spent an evening at Morley, as invented by Philip Lewer, and was confused by the paintings. “I then being hungry, to the restaurant below grounde, which is a mighty odde room, wherein clever artists have made romantique pictures right on to the walls; and weird they are, as the eye ever did see, and I confess I never did perceive their like, not even with merry mind after mighty drinking. ‘Tis said, indeed, that many of the paintings do represent divers scenes from the plays of one Will Shaikespiere, which, if it be true, do surprise me, for I never did hear of this Mr. Shaikespiere before, nor know he made plays. Yet methinks he might be a foreign play-maker from distant parts, where men in garments of green or pink do fly birdily through great clouds scarce sixteen inches above the grounde, and carry little forests unto saucy jades who do dress in nothingness with mighty indifferency, and Lord! How like Mother Eve they do appear; and many other strangenesses besides.[5]Morley Magazine, December 1932, p.42

The unveiling was set for February 6th, 1930, by Stanley Baldwin, M.P., and caused a stir in the art world which has probably not been seen since. ”Briefly, the scheme was to portray, as though upon various stages connected by colonnades, a number of scenes from Elizabethan plays. In the air between these marionette theatres frisk and prance and sprawl the most amusing series of figures from classical mythology and other sources that perhaps have ever been assembled. The whole scheme, which abounds in elements suggested from divers sources, Pompeian, medieval, and others, is bound together by a thoroughly witty and “conceited” style. The decoration is not free in parts from freakishness and even affectation, and its irrelevancies may seem to a few hardly justifiable, but there is no question that a more highly spiced and daintily dished entertainment has seldom been offered upon any walls, far less those of a College for working men and women”.[6]The Scotsman, 6th February, 1930 (the author is Douglas Percy Bliss, although not named on this cutting. He was a contemporary of Bawden and Ravilious at the RCA, and wrote a book about Edward Bawden … Continue reading

Each artist and the other people involved in the project was given a presentation album, containing a beautifully lettered frontispiece, copies of images from The Studio and The Graphic and other photographs. The College’s copy is at Lambeth Archives.
Queen Mary, hearing of the success of the murals, paid a private visit at very short notice. The three artists were summoned to Morley to meet her and to explain the pictures to her. Her interest was piqued when she heard that there was a doll’s house featured. Her famous doll’s house can still be seen at Windsor Castle. Seven years later, the Queen graciously consented to open the Extension and she presented the new library with the two-volume set of the Queen’s Doll’s House book, which she signed. Although battered by war, we still have them.

On the night of October 15th, 1940, many men, women and children were sheltering in the College as they had been bombed out. One large bomb hit the building and “it folded like a pack of cards”.[7]Fifty-seven people were killed and the beautiful, much heralded work by Mahoney, Bawden and Ravilious was lost. Fortunately an excellent set of monochrome photographs survives as does the press … Continue reading

Moodle Morley Archive page – https://vle.morleycollege.ac.uk/course/view.php?id=1646
This page has the indexes for the Morley Magazines and other information, some magazines have been digitised and all the issues from 2000 are available online.
The library catalogue may also be searched via this link.

Morley has commissioned many works of art over the years, from Bridget Riley and Maggi Hambling among others. The college organises talks and walks so you too can enjoy the results.

Previous Post: « Talk: On the Wings of Love? Fugitive marriages in the Georgian era
Next Post: Rifleman Hutson: an only son missing on the Somme and from the Stockwell War Memorial »