The following is based on an articles by Peggy Sheath published in The Vauxhall Society’s Newsletter during 1980.

The opening of Westminster Bridge in 1750, had led to considerable expansion and development in Lambeth, and a new road was laid down from the bridge, which eventually linked with Brighton. Some fine houses were built in the Lambeth and Kennington Roads, but within a few decades the area began to fill up with poor housing and many of the existing properties in Lambeth were converted into rooming houses and apartments. Seventy years later, the Ordnance map of 1875 shows the area entirely built up, in and around Lambeth Walk, except for a small open space called Fountain Gardens.

Just as by the 1780s there was a great contrast between the eastern and western suburbs of London – the rich by now living in the superb street and squares that were being developed in the West End and the poor becoming more and more the sole inhabitants of the old, narrow and dank streets of the East End – so a similar gulf was beginning to emerge between north and south of the river. The South Bank was becoming a centre for the dirtier trades, such as the tanneries of Bermondsey, the market gardens of Lambeth were gradually replaced by potteries, glass works, breweries, and the ever-growing timber yards.

Between 1808 and 1831, the population of Lambeth trebled. Many of the houses of the poor were so substandard that they were not even assessed for rates. The coming of the railways to Lambeth in the 1840s caused a great deal of hardship on those poor people displaced from their homes. Large areas of working-class London were laid waste. South of the Thames, the ecclesiastical commissioners and numerous City companies were only too keen to rid themselves of the embarrassing slum properties which had been developed on their lands in Lambeth, in return for a healthy income by way of compensation from the railway companies. 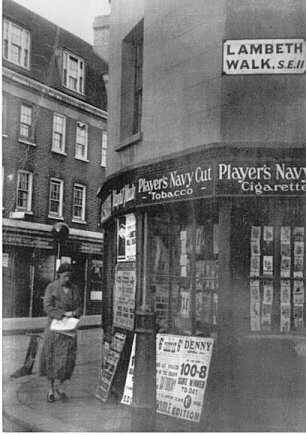 Lambeth Walk at the junction with Black Prince Road

The census of 1851 conveys a fascinating glimpse of the trades and industries which by then were flourishing in Lambeth Walk. In that year, the number of shops exceeded the living accommodation. For example, at No. 3 lived Joseph Simmons, aged 33, carrying on business as a chemist, surgeon and dentist; also his wife Elizabeth Ann, aged 32; their six-month old daughter Maria Mercy; Emily Gibbs (Mr Simmons’ unmarried sister-in-law) aged 35; and Francis Salter, their 11-year old general servant.

At No. 48, lived John Galvin, aged 24, a hatter journeyman; also his wife Jane, aged 26, a hat trimmer; James Fulham, their servant and errand boy, aged 14. In the same premises, James Hutchens, aged 25, a hatter’s assistant, and Phoebe, his wife aged 26, and their three children aged 4, 2 and 1.

The Trades Directory of 1848 lists No. 50 Lambeth Walk as being in the hands of Joseph S Maynard “furn. ironmonger”, but by 1851 the shop had changed hands and William Shepherd, aged 25, was carrying on business there as a confectioner with his wife Elizabeth, aged 27; also William, his one-year-old son and Thomas, his three-month-old son, and a general servant by the name of Sarah Derwent who was 12 years old.

No 78 Lambeth Walk was inhabited in 1851 by Sarah Dean, a widow then aged 76, born in Braintree, Essex in 1775. This may have been a private house, as she gives as her occupation “lodging house keeper”.

At 82 Lambeth Walk, which appears to have been a private house, lived Henry Hill, a coal dealer. This family occupied only half the house. He had a wife Elizabeth who listed her occupation as “mangling”. She had a son aged two years and a daughter aged six.

The census also revealed changes in work then available. At No. 7 Mill Street, living with his 26-year-old daughter Ann, a servant, was Henry Armstrong – formerly a cheesemonger, but in 1851 he had become a railway porter. At No. 2 Mill Street was Walter Trill, described as an “engine driver”, aged 16. His father John Trill was a 54-year-old carpenter and joiner. At 12 Mill Street lived a 44-year-old railway guard from Ireland.

Rapid deterioration of the area followed the coming of the railways to Lambeth. Streets were cut up or dismembered, while damp dark arches formed by the viaducts encouraged more disreputable people to the district. The better-off citizens, because of the convenience of railway travel, were able to move to outer suburbs such as Streatham and Norwood. By the end of the 19th century, over 100,000 people had been uprooted from their homes in London by the coming of the railway. The area around Lambeth Walk was crowded with poorer people who could not afford to move away.

The opening of a school in 1851 indicates the nature of the neighbourhood by that year. In Doughty Street (now Newport Street), close to Lambeth Walk, a handsome building – a Ragged School – was built. It had been inaugurated on 5 March 1851 at a public meeting. Lord Ashley was in the Chair and a Mr Fred Doveton, Honourable Secretary to the Committee, gave a speech on the origin of the school. He said:

In 1845 a few of the destitute and degraded children of Lambeth were accustomed to assemble for instruction on Sabbath evening in a schoolroom in Palace Yard near the Palace. In the following year a committee was formed by some people in the neighbourhood for affording children instruction during the week. The school was shortly removed to one of the arches of the South West Railway Company, being granted for the purpose, and about that time excited the sympathy and support of the late Mrs Beaufoy and on her death her husband intimated his intention of perpetuating her memory and fulfilling her benevolent wishes by founding these schools.

The building cost £10,000 with a further £4,000 for permanent maintenance. The accommodation was for 800 children, with two large classrooms, one for boys and one for girls; there were two reception rooms for training children on first admission and four smaller classrooms where young persons “who show more than the usual diligence are taught in higher branches of education”. In 1904 the railway was widened and all but the southern wing was pulled down; the building is still in existence today. The school was removed to temporary premises in Auckland Street, Vauxhall, and later to Wandsworth.